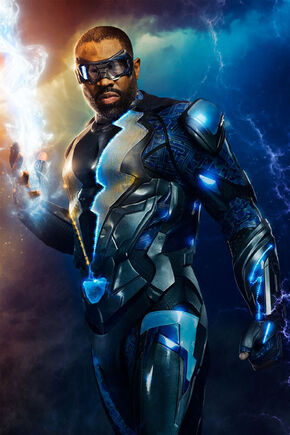 Jefferson Pierce is a retired superhero with the ability to harness and control electricity and becomes a principal at Garfield High School. He returns to fighting crime thanks to his daughter and the threat of a star student being recruited by a local gang.

Tier: 9-B physically, 8-C with electricity

Attack Potency: Wall level physically (Could fight against his daughter who could shatter stone and destroy a Confederate statue by stomping the ground), Building level+ with electricity (Can produce actual lightning which is proved by the fact Gambi stated that any person stuck by Black Lightning's electricity would usually have Lichtenberg figure scars).

Durability: Wall level (Could tank strikes from his daughter), higher with suit and forcefield (Suit stops Glock pistol bullets at close range, he could block multiple semi-automatic rifle bullets with his forcefield)