VS Battles Wiki
Register
Don't have an account?
Sign In
in: Characters, Marvel Comics, Humans,
and 39 more 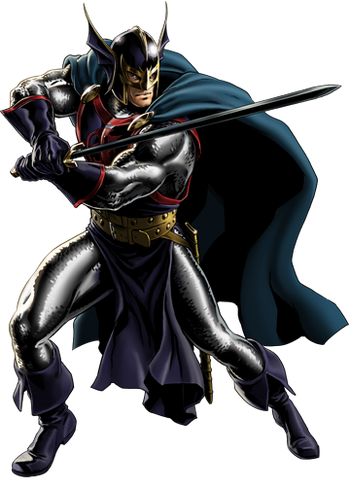 Dane Whitman is a fictional superhero appearing in American comic books published by Marvel Comics. He is the company's third character to bear the name Black Knight. Created by writer Roy Thomas and artist John Buscema, he first appeared in The Avengers #47 (December 1967)

The third Black Knight is the descendant of the original Black Knight, Sir Percy of Scandia and inherited the original Knight's Ebony Blade, a mystical sword that carried a curse. Whitman is the nephew of Nathan Garrett, a super villain who was also known as the Black Knight. Whitman took the Black Knight name to help restore honor to it, and has been a long time member of various incarnations of the Avengers, as well as the Defenders, Ultraforce, Heroes for Hire, and MI: 13.

Tier: 8-C. 4-B with the Ebony Blade and Photon Sword

Age: Unknown, likely in his 20s

Superhuman Physical Characteristics, Genius Intelligence, Expert in Hand to Hand Combat and Master Swordsmanship (Frequently stated to be the greatest swordsman of all time). Resistance to Fire Manipulation (Unaffected by a dragon's firebreath)

Magic, Berserk Mode (Anyone who gives into the temptation of the Ebony Blade would enter a state of bloodlust, going on a rampage), Curse Manipulation (Anyone who attempts to possess the ebony blade, without significant willpower, will activate the curse), Summoning (Can summon the blade back to him) and extremely limited Time Travel (Can teleport to the blade even if it's in the future). Resistance to Transmutation (The blade cannot be transmuted by Grey Gargoyle or Sersi) and Fire Manipulation (split flames of Firelord)

Flight with his mechanical horses, Smoke Manipulation and limited Poison Manipulation (Can spray out a thick cloud of smoke that has adverse effects to insects), Heat Projection (As shown here) and Technology Manipulation (With his ionic blasts, can fry circuits) with his Power Lance, Absorption with Power Drainers, and Energy Projection (As show here), Statistics Amplification (Can transfer the strength of his sword onto his fists), Limited Durability Negation (The sword attacks the nervous system of its opponents), Aura (Can set his sword to reflect specific energies prior) with his Photon Sword.

Attack Potency: Building level (Knocked out Grey Gargoyle). Likely Solar System level with the Ebony Blade (Can destroy the forcefields of Kang the Conqueror) and the Photon Sword (Comparable to the Ebony Blade)

Speed: Massively Hypersonic+ (Dodged a blast by Kang the Conqueror and Hawkeye's arrow)

Lifting Strength: Athletic Human (Can carry a woman with one arm)

Durability: Building level (Survived being hit by missiles and tanked a hit from a stone giant), likely Solar System level for the Ebony Blade and the Photon Sword (As strong as Wolverine's claws, split Firelord's cosmic fire)

Stamina: High (Capable of fighting even after being kicked in a wound)

Range: Dozens of feet with his laser lance, otherwise extended melee range with his sword

Intelligence: Extraordinary Genius (He is an expert in weaponry, and can create complex weapons from debris and create his own technology. Stated by Captain America to have military tactical sense "second to none".)

Weaknesses: Due to the fact that the Ebony Blade is linked with Dane, the evil acts that the wielder performs will taint the sword to seek more blood, pushing Dane to be more violent and making him to go bloodlusted.