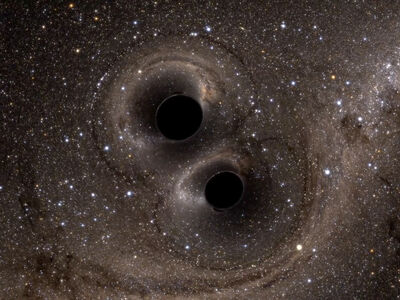 While a completely correct depiction can not be expected, some basic laws have to be followed. If that is not the case, we can not be certain about the black hole being an actual black hole and not just a fake black hole, which can not be assumed to have the properties black holes usually have.

About Inescapability and destructiveness

The features that make a black hole outstanding for vs-battles are its destructiveness and its inescapability. Hence those features are the most important to know about to deal with most feats involving black holes.

Let us first take a look at inescapability. Now one thing interesting about gravity in the general theory of relativity is that gravity isn´t a force, but just a geometrical feature of spacetime.

A good way to explain that is the light cone model. As in the article already shown nothing can escape a black hole once past the event horizon, because it will just travel further into the black hole no matter in which direction it goes. That is, as long as it is confined in the light cone, which only is the case for things below the speed of light. So faster than light characters would still be capable to escape a black hole past the event horizon even though even for them it gets more and more difficult, and at the center of the black hole, in the singularity, it would require infinite speed to do so.

The destructiveness of a black hole works over the same mechanism as for the gravitational fields of other celestial bodies: Through Tidal force, maybe better known as spaghettification in context with black holes. Tidal forces destroy things through the different strength of force on different points of the body.

Basically points closer to the black hole get accelerated stronger than points further away and through that the whole thing gets stretched. One can easily imagine it by taking one end of a rubber band in each hand and then move the right hand swiftly to the right and the left hand slowly to the right. The distance between the hands will become larger and the rubber band will stretch. One will notice that the rubber band will begin pulling the hands together, which means that it will try to even out their speed.

In the same way the forces holding our body together usually do so in a manner so that it is evenly accelerated through gravitation. But in a black hole things become extreme. Destruction would occur in three steps. First the body will just be ripped apart through tidal forces, because the force becames too strong to be counteracted through the forces holding the body together. Further in the tidal forces will become stronger than the four fundamental forces, which means that atoms will be disintegrated to the point that only elementary particles remain, without a special structure. In vs-battles terms that means they get disintegrated on quantum level.

With this knowledge most feats should be able to be appraisable. In the following we will go through a few examples, which typically show that a black hole may not have the usual properties necessary to use it as a feat.

Now out of the reasons stated above a regular 3-dimensional character would get destroyed when approaching the singularity (the center of the black hole). The tidal forces would become infinite and he or she would be destroyed no matter how high his or her durability is. As such, since saying that a characters durability is infinite is usually an enormous outlier, surviving a singularity can extremely seldom be taken as a durability feat. It can only be understood as a feat for resistance against black holes.

A black hole can not be destroyed by the use of physical force. That has multiple reasons. For one thing the center of a black hole is a point. If one were to focus energy on a single point that would mean that the energy becomes infinitely dense, which means that it in itself would become a black hole. Simpler said, energy itself produces gravity and by putting it into a black hole the black hole will just grow instead of being destroyed.

The second reason is that in order to destroy a black hole one would have to somehow remove mass/energy out of it. But that is in common physics impossible, since even with infinite energy one could not accelerate matter above the speed of light. While that can be ignored in case of characters going FTL, when it comes to destroying something it has to be considered, since destruction in almost all cases is done through energy.

Because of both of these reasons, a black hole can not be destroyed through normal methods. Destroying it through brute force would conflict with the very basics of its nature and as such it should be doubted if it really is a black hole, with common black hole properties.

A clarification to be made is that, while black holes can not be destroyed through brute force, they can possibly be destroyed by other means. Quantum science has the Black hole information paradox, which theories give various possibilities to how a black hole could destroy itself over time. These theories don´t break the ideas of inescapability and indestructibility of the black hole, but instead circumvent them.

For example Hawking radiation does not actually remove energy/matter from the black hole. Instead it produces energy at the border of the event horizon and, to uphold conservation of energy, shoots particles with negative energy into the black hole, so that the energy within it lessens.

Other theories use other processes that can only happen with a uncontrollable probability in order to remove energy from the black hole. While this type of destruction is possible, as long as it is not stated that it was used it should not be assumed that it was and destroying a black hole through such methods would not produce an attack potency feat, since one did not actually destroy it through energy, but just circumvented its durability.

A black hole can be moved, since it does not break the law of conservation of momentum. So the momentum of everything thrown into a black hole will add to the total momentum of the black hole itself.

But a problem occurs if someone would try to hold a black hole in his hand, to kick it into an other direction or do something similar.

The Event horizon of a black hole is an intangible phenomenon, so a black hole can not be grabbed by it. One could possibly grab and throw a black hole through the singularity in its center, but because it destroys everything approaching it (as explained in 2) it is practically impossible.

So while moving a black hole by shooting something into it is possible moving it through physical contact is impossible, because it would require an unreachable durability in order to remain whole when doing it.

Aside from recognizing what is not a realistic black hole, it is also important to figure out what might be a black hole in the first place. Under normal circumstances, if a character encounters something resembling a black hole, there will be a statement regarding that. If the statement is from a reliable source and it doesn't behave in an unrealistic manner as outlined previously, it can be safely assumed to be a proper black hole.

If for any reason the statement is unreliable, typical black hole properties such as bending light also outside the event horizon, having the appropriate gravitational pull for a black hole of its given size, displaying Hawking Radiation, and so on can help to support the statement.

In the event that there is not a statement about a black hole-like object actually being a black hole at all, one could still argue it to be a black hole if the method of creation is known. If, for instance, it is created by extreme compression of an appropriate amount of matter or due to the collapse of a large star, the assumption that the resulting mass is a black hole would be reasonable. However, a creation by high concentration of energy should not be considered without a supporting statement that the object in question is a black hole. If a character has created galaxies, or even universes, it is highly likely that they are capable of creating real black holes as those are usually parts of these. As such the ability to create such structures can support the idea that something that was not stated to be a black hole is one. However, that is only really the case if the object in question was already established to very likely be a black hole, instead of some other object.

In all cases any given black hole must still have to behave realistically, of course.

Black holes have many special and amazing properties, but aside from the parts that can not be quantified in a number, which Attack Potency would one get for creating a black hole?

In general creating a black hole is about equal to creating any other celestial bodies. Usually creating a planet is seen as planet level and creating a star is seen as star level etc.

So how do black holes rank? The answer lies in their mass. Usually stellar black holes have masses ranging from about 5 to several tens of solar masses and can easily be assumed to be at least star level, if not large star level. But some characters also have the ability to create very small black holes and some black holes in fiction may even be extremely large. So how do we rank them?

The good thing is that there is an easy formula that lets us approximate the mass of black holes based on the radius of the event horizon. It is:

rs is the Schwarzschild radius (radius of the event horizon);
G is the gravitational constant;
M is the mass of the object;
c is the speed of light in vacuum.

So if we know the size we can just set in all values and can easily solve to M.

To roughly estimate the Attack Potency level one can then compare its mass to either that of the earth or the sun, whichever is closer to its mass. If it's x times the mass of the object it is compared to we estimate that it's creation would equal about x times the energy needed to destroy said object, i.e. either x-times baseline planet level for earth or x-times baseline star level for the sun.

A more comfortable way may be calculators for the mass and size of a black hole such as this one or this one.

A black hole can, as mentioned under point 4 be destroyed through natural means, by Hawking radiation. Since such an event converts the black hole in energy radiated outwards one could assume that a character that survives inside a black hole during its collapse would get its mass-energy as durability. Now there are several problem with such an assumption:

First the question whether or not we actually deal with such an black hole collapse. In nature Hawking radiation would require 8*1050 years to disintegrate a 1 centimeter big black hole, 8*1056 years for a 1 meter big black hole and 1069 years for the smallest black hole actually found in our universe. That is way too long and of course would also hardly be a durability feat, given that we would just have a energy of less than 1 joule per year.