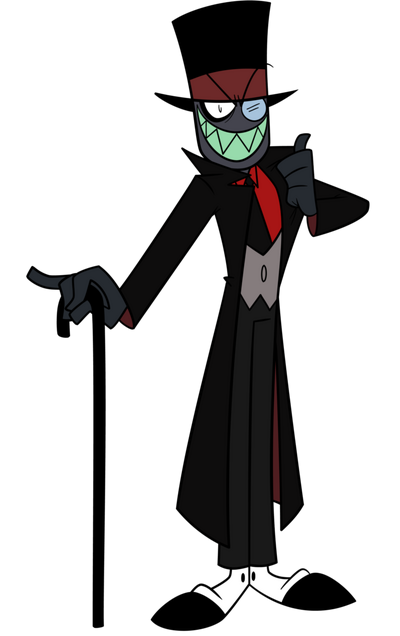 Black Hat is the primary character of Villainous. He is the leader of the Black Hat Organization. Not much is known about him aside from being a sadistic and seemingly immortal demonic entity with virtually no redeemable qualities.

Tier: High 7-A, High 5-A with Black Hat Magisword

Age: Unknown, at least over 2,000 years old, implied to be immortal

Powers and Abilities: Superhuman Physical Characteristics, Longevity (Has allegedly existed since Native American and Ancient Roman times, and possibly before that), Reality Warping (Turned 5.0.5.'s ice cream into a monster), Subjective Reality (Brought a movie monster from the television into reality and can become part of a painting at will), Likely Time Manipulation (Was capable of merging a broken vase back together with his powers), Can shoot lasers out of his monocle, Shapeshifting (Shapeshifted into and perfectly mimicked 5.0.5.), Fire Manipulation (Creates bursts of red flames when enraged), Sealing (Can seal demons inside objects to possess them), Immersion (Trapped Dementia inside a TV), Telekinesis, Portal Creation, Sound Manipulation (Can open a portal to a dimension where terrible noise comes out from), Teleportation, Death Manipulation (States that people die if they say his real name), Limited Soul Manipulation (Can get the souls from those who sign his contract), Non-Physical Interaction (Can touch souls), Limited Fear Inducement, Madness Manipulation (Type 3) and Empathic Manipulation (Prolonged exposure to Black Hat can induce ailments and drive people to madness, to turn them into his loyal slaves afterwards. Non-combat applicable), Resistance to Sound Manipulation (Unaffected by the sound coming from another dimension, which was torturing Dementia and 5.0.5. after a few seconds), Resistance to Petrification (Looks Medusa in the eyes unaffected), Mind Manipulation (Able to make his subjects act like animals against their will with no memory of the event), Weather Manipulation (Can created black clouds around his island), Can Control his Reflection, and Size Manipulation (Up to Large Size Type 5)

Speed: Subsonic, likely far higher (Was able to surprise Dr. Flug while he was looking at Black Hat), Relativistic attack speed with the Black Hat Magisword

Lifting Strength: Unknown, at least Regular Human with Telekinesis (His telekinesis is strong enough to grab Dr. Flug's body with no visible effort)

Striking Strength: Building Class (Made the Black Hat Inc. building tilt by ramming it from inside a picture frame)

Durability: Large Mountain level (Was able to withstand being part of the eruption of Mount Vesuvius)

Intelligence: At least above average

Weaknesses: Can be ill-tempered and impatient. Despises anything cute, lovely, or heroic. Can be summoned against his will.