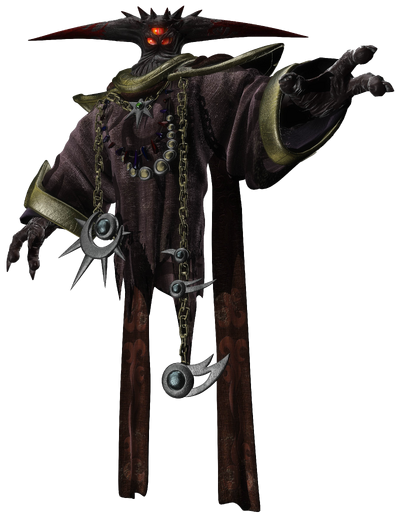 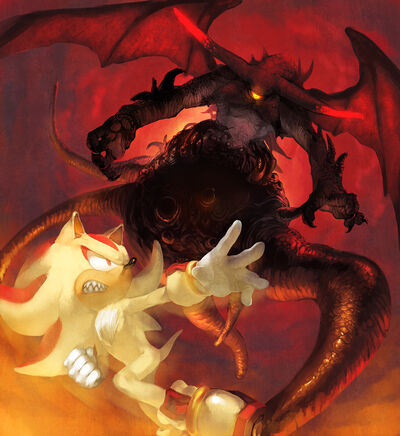 Black Doom is the primary antagonist in Shadow the Hedgehog. He is the sinister leader of the Black Arms and the oldest member of his species. The Black Arms are Black Doom's own spawn and appear to operate with an insect-like hive intelligence, seemingly preventing any attempts to challenge Black Doom for leadership. He presents an almost religious front and shows little respect for humanity due to its sins against each other and the planet Earth.

Powers and Abilities: Superhuman Physical Characteristics, Chaos Energy Manipulation, Levitation, Immortality (Type 1), BFR, Body Control, Teleportation, Telepathy, Telekinesis, Time Manipulation, Weather Manipulation (Can create large storms), Mind Control (Constantly controls the entirety of the Black Arms, as they are nothing more than an extension of his will), Illusion Creation, Intangibility, Transformation, Can summon blades of energy, Can shoot meteors, Self-Sustenance (Types 1, and 2), Resistance to Extreme Cold, Cosmic Radiations and Immunity to paralyzing gas | All previous abilities but on a vastly enhanced scale, Self-Sustenance (Type 3), Large Size (Type 1), True Flight, Can breathe fire, Can freeze time and teleport away with Chaos Control, Can raise rubble and rocks which shoots lasers

Attack Potency: Planet level+ (Can hurt both Shadow and Sonic) | Multi-Solar System level (Put up a fight against Super Shadow)

Speed: FTL | Massively FTL+ (Kept up with Super Shadow, who is equal to Super Sonic)

Durability: Planet level+ (Fought Sonic and Shadow at the same time) | Multi-Solar System level (Super Shadow's attacks couldn't do notable damage to him except for his eye)

Intelligence: Gifted (Manipulated Shadow in order to complete his plans)

Weaknesses: Black Doom can be overconfident | His Doom Eye 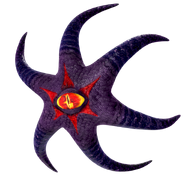 Doom's Eye.
Add a photo to this gallery