Black Bolt (Blackagar Boltagon) is a fictional character that appears in publications by Marvel Comics. Created by Stan Lee and Jack Kirby, the character first appears in Fantastic Four #45 (December 1965). Black Bolt is the ruler of the Inhumans, a reclusive race of genetically altered superhumans. Black Bolt's signature power is his voice, as his electron-harnessing ability is linked to the speech center of his brain. Speaking triggers a massive disturbance in the form of a highly destructive shockwave capable of leveling a city. Due to the extreme danger posed by this power, the character has undergone rigorous mental training to prevent himself from uttering a sound, even in sleep, and he usually remains completely silent and communicates through sign language or via a spokesperson.

Attack Potency: Large Planet level (Traded blows with The Thing. Embarrassed Namor. Could harm the Sphinx who was undamaged by attacks from the Thing). Solar System level with his voice (He could empower the T-Bomb, destroyed a barrier Thor was unable to damage, harmed Gladiator with a whisper)

Lifting Strength: Class 100 (Said to be able to lift around 75 to 100 tons in Inhumans and War of Kings)

Standard Equipment: His suit, which includes a tuning fork on his head that helps regulate his electron manipulation powers. The Space Gem, which he will pretty much never use.

Intelligence: Genius. A brilliant scientist and strategist who has led the Inhuman race for decades and outsmarted his genius brother, Maximus, time and time again.

Weaknesses: His powers can be disrupted if the tuning fork on his head is sufficiently damaged. He literally cannot speak without causing massive devastation. 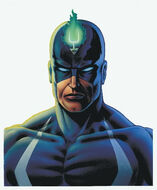