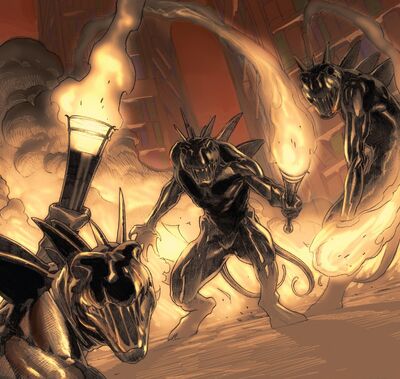 Black Berserkers are semi-sentient bestial creatures created by Gorr The God Butcher using All-Black the Necrosword. These creatures act as sentinels and jailers for his planet, policing and at times killing the gods Gorr enslaved, as well as acting as guards against Thor.

Classification: Spawn of the All-Black Symbiote

Intelligence: Animalistic (Black Berserkers have very little if any actual intelligence as they were created, by Gorr's own admission, to have no fighting skills but only fury)

Retrieved from "https://vsbattles.fandom.com/wiki/Black_Berserkers?oldid=5454768"
Community content is available under CC-BY-SA unless otherwise noted.