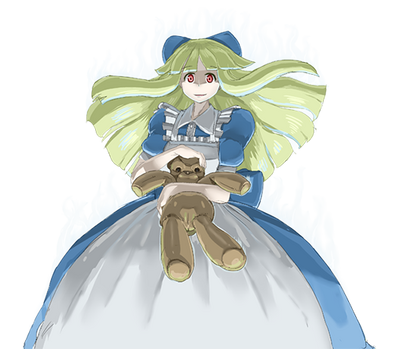 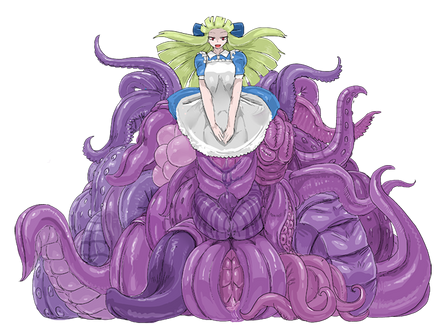 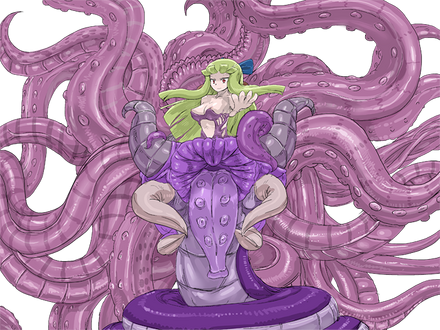 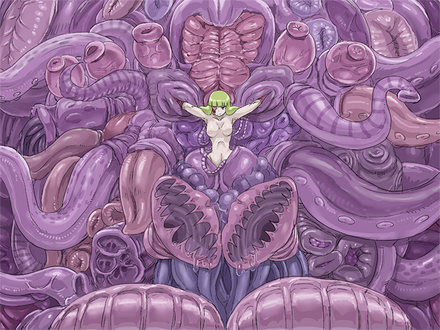 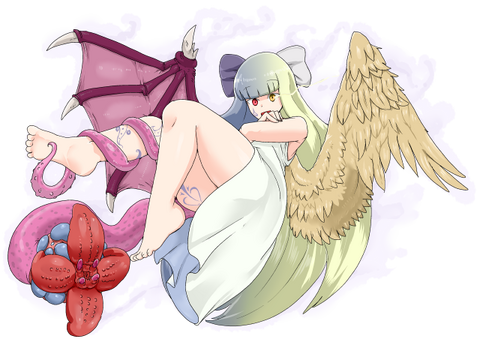 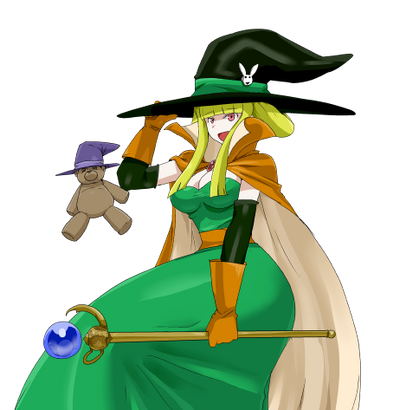 Alipheese Fateburn VIII, better known as Black Alice, was the 8th Monster Lord 500 years ago. She was known as being particularly ruthless and sadistic, straining relations between humans and monsters. This caused not only several heroes to rise up against her, but also even rebels from her own kind to form, planning to overthrow her. As the legend goes, she was defeated by the hero Heinrich. Following this, Black Alice's sister gave birth to the 10th Monster Lord to continue the legacy, as Black Alice didn't have any descents.

However, the truth was a little different. Instead of dying at the hands of Heinrich, Black Alice was saved by Goddess Ilias. In exchange for her continued survival, she was made to serve Ilias in her plans for the re-creation of the world. Her role was to control the flow of Dark Magic that would be created from the death of so many monsters and prevent the resurrection of Alipheese Fateburn the First.

This was not what Black Alice had in mind, however. Both Promestein and herself schemed together to overthrow Ilias while pretending to be faithful to her. Promestein was to work on a drug called "White Rabbit", which would add the genes of the first Monster Lord to those who took it, allowing Black Alice to absorb Goddess Ilias and achieve the fusion of holy and dark energy: Chaos.

While the plan originally worked, it was thwarted by Black Alice's defeat against Luka, following the defeat of Goddess Ilias, who had risen from the former's corpse. The death of the goddess damaged space-time to a large degree, causing an experiment prevented by Ilias in the past to happen regardless. This experiment summoned a dying Black Alice into the past, where Ilias wasn't there to interfere. This allowed the fusion of dark and holy magic inside Black Alice to finally complete, allowing her to finally ascend and become a third goddess: The Goddess of Chaos. Her birth caused the original timeline to be completely destroyed and caused the creation of an infinite amount of timelines into the world, kickstarting the plot of the second game.

Alicetroemeria is a persona taken by Black Alice, 500 years ago. She took the role of a human mage and became part of Heinrich's two-person party to "defeat the Monster Lord", similarly to Alice after her. It is unknown what happened to this persona in the original timeline, nor what caused her and Heinrich's relationship to degrade. However, in the 500 years ago timeline, she joined up with Luka's party from the Paradox Timeline after being accidentally teleported. She now fights alongside them to protect the world from chaos.

All previous abilities, plus Absorption (On a higher scale than before. She can completely absorb any beings, even angels and abstracts), Size Manipulation, Large Size (Type 0, eventually Type 5), Enhanced Senses (Can detect any disturbances within the wind, down to the smallest insect moving), Precognition (Grandine allows her to detect any disturbances in the universe’s flow and to automatically reacts to them. Mere bloodlust can affect the universe’s flow, allowing her to detect it)

Self-Sustenance (Type 1, 2, and 3), Immortality (Type 1, 3, 5 and 8; dependent on Chaos), Regeneration (High-Godly. Embodies the nothingness that existed before all of space-time and most concepts and will always come back from it), Acausality (Type 4), Non-Corporeal, Nonexistent Physiology (Type 2), Abstract Existence (Type 1. As she is a goddess, she is the abstract concept of her element, namely Chaos), Void Manipulation (Can weaponize chaos, which is nothingness itself and erases anything it enters in contact with. It can even erase ghosts and angels. Passively causes space-time to erode around herself. Can completely erase Apoptosis like Adramelech), Chaos Manipulation, Conceptual Manipulation (Type 2. Can erase abstracts like the Spirits), Information Manipulation (Can cause the local space-time to get overloaded with information, redacting speech and then erasing the surroundings), Transmutation (Continued exposure to Chaos or Apoptosis can cause the Apoptosis phenomenon in someone, turning them into an Apoptosis), Quantum Manipulation (Created the Quantum element from herself), Cosmic Awareness (Was able to react to the White Rabbit despite being only a fragment of the past, unable to react to time travelers like the White Rabbit)

Range: Planetary (Should have range comparable to Heinrich), possibly Universal (Can manipulate the dark magic of the universe and should be able to do so on a scale similar to Alice I) | Multiversal+ (Embodies Chaos on a multiversal scale. Created infinite timelines through her "birth")

Intelligence: At least Gifted (Most likely should be as smart as other Monster Lord such as Alice)

Standard Tactics: As stated before, she aims to keep up the act of being a normal human mage and thus will not use overwhelmingly strong attacks that could bust her disguise, even if defeat is likely. She keeps most of her normal personality otherwise. | Her sadism will mostly cause her to play with her opponent using various abilities. As with most Monster Lords, she favors iconic techniques like Monster Lord's Cruelty or the Demon Eyes. If she ever finds herself bored with an opponent, she will aim to kill them in a quick yet painful way. | The White Rabbit drug caused her mind to deteriorate, causing her to be focused on consuming everything on sight, although she will still use a certain degree of tactics in her fights. | Unknown, but she would most likely aim to erase/corrupt her opponents quickly, given her first appearance.