VS Battles Wiki
Register
Don't have an account?
Sign In
Advertisement
in: Tier 8, Tier 6, Justice League Action,
and 19 more 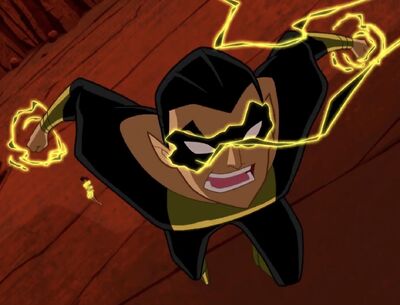 Black Adam was The Wizard's former champion. Millenia ago, he was granted incredible powers so he could protect humanity, but instead he used them for evil, causing The Wizard to seek a kind soul to bestow his powers.

Attack Potency: At least Building level+, possibly Large Island level+ (Can fight Shazam, who is physically comparable to Superman. After his imprisonment, his magic grew twice as strong, requiring the combined efforts of Shazam, Superman, Wonder Woman, Swamp Thing, Plastic Man and John Constantine to take him down)

Speed: At least Relativistic+, possibly FTL (Can keep up with Superman)

Intelligence: Above Average. Black Adam is a skilled fighter and magic user, capable of fighting both Superman and Shazam at the same time. He outwitted The Wizard, forcing him to summon Billy Batson only to absorb the latter's powers and claim the Throne of Eternity for himself