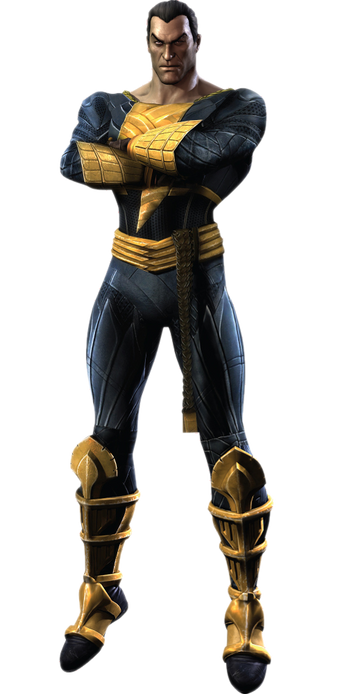 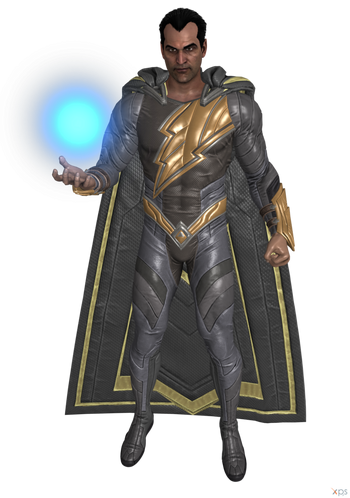 Black Adam is a playable character and major antagonist in Injustice: Gods Among Us and Injustice 2. He is classified as a Power User, and uses magical powers derived from the Gods of Ancient Egypt.

Black Adam is a supporter of Superman’s One Earth government because it resembles his own rule. Adam claims that Superman used his rule in Kahndaq as a model for One Earth.

After the fall of the Regime, Black Adam returned to his home defeated and humiliated. Staying hidden from Batman’s watchful eye, Kahndaq has become a safe haven for the Regime’s remnants. There they await the day that together they can restore the Regime's rule upon the world.

Powers and Abilities: Superhuman Physical Characteristics, Immortality (Type 1), Magic, Electricity Manipulation (Can produce blast of lightning, conjure orbs to protect himself or throw or shape it into a cage around himself that he can transform into a larger bolt), Weather Manipulation, Statistics Amplification (With Kahndaq Black Magic and Soul of Shazam), Flight, Portal Creation (Can open the gateway to the Rock of Eternity through a powerful release of magical energy), Blessed (Possesses the powers of six Egyptian Gods), Teleportation (Can teleport through lightning), Master Hand-To-Hand Combattant

Speed: Massively FTL+ (Equal to Shazam and comparable to Superman)

Durability: Small Country level (Took many his from Wonder Woman and Firestorm and can endure Superman's attacks. On par with Shazam)

Intelligence: Very High. Being blessed with divine powers, Black Adam has access to a vast extent of knowledge, especially about magic and supernatural forces along with wisdom of the Egyptian God Zehuti wich    provides him with counsel and advice in times of need.

Weaknesses: Can be forced to revert to human form after uttering his magic word, "Shazam", and struck by the divine lightning that can depower him.