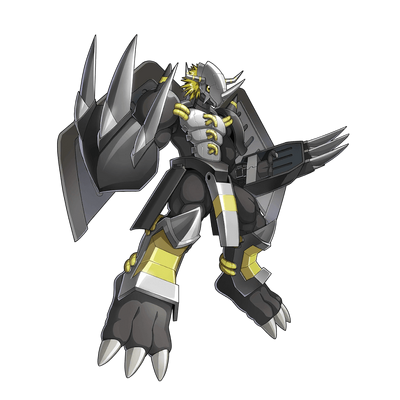 BlackWarGreymon is a Virus-species War Greymon feared as the "Jet-black Dragon Warrior". Although its creed and principles are the polar opposite of those of the Virus Busters War Greymon, it exists for the sake of its own peculiar "Justice". It detests cowardice and foul play, and it doesn't consider itself a fellow of vulgar Digimon, even if they are of the same Virus-species. The full details of how it converted to a Virus are a mystery, and the "Brave Shield" equipped to its back is not engraved with the Crest of Courage. 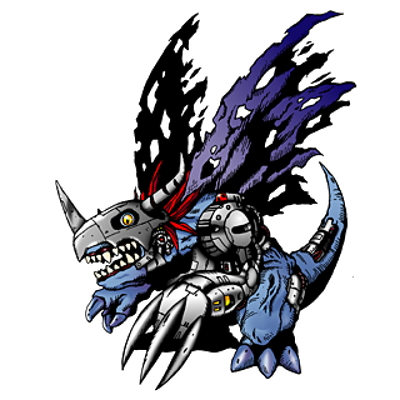 The strongest Cyborg Digimon, which has mechanized more than half of its body. Going through numerous battles, it was able to survive by mechanizing its body. In order to evolve to Metal Greymon, it must fight its way through and defeat the formidable opponents who come against it. Also, Metal Greymon's offensive power is said to equal that of a single nuclear warhead. It fires missiles from the hatch on part of its chest. 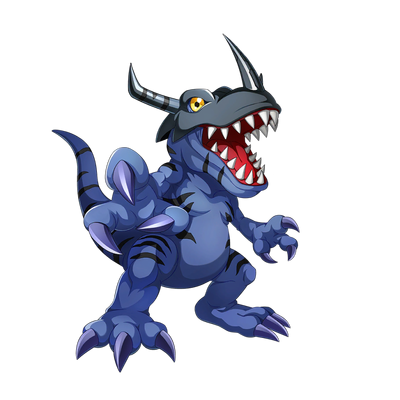 A Virus attribute Greymon with a bluish-black body. While it has been called a 'feral Greymon', befitting its more violent disposition, it is in no way a lone wolf and possesses enough intelligence to work together with its allies as a team. 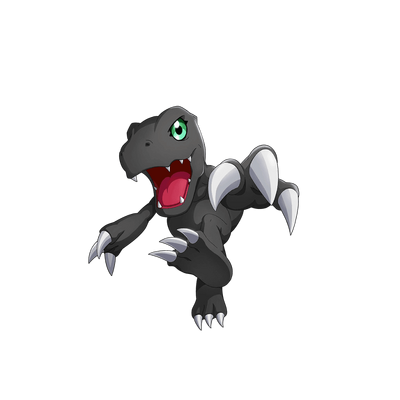 An Agumon that has been dyed black due to a virus. Because it is still on the way to adulthood, its power is low, but as its personality is quite ferocious, it doesn't understand fear. It has grown hard, sharp claws on its hands and feet, and demonstrates its power in battle. It is also a being that foretells evolution to a great and powerful Digimon. 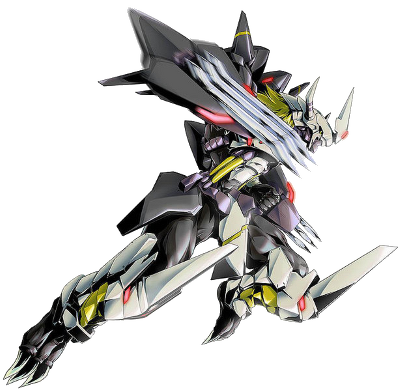 Its negative power has been condensed to its maximum, and its cunning for seizing victory by any means necessary has been accelerated. It has imparted the strongest toughness of the "Brave Shield" to the "Dramon Killers", leading to it possessing perfected equipment of unified offense and defense. Due to its fighting style, in which it instantly plunges into the heart of the enemy with the vernier it has equipped to its back, which boast explosive acceleration at the expense of it being able to fly for extended periods, it has certainly become the strongest form of land combat Digimon, a "Land War Hero". 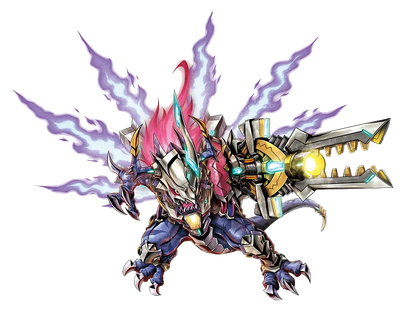 Each of its mechanized portions have been updated; in particular, its "Alteros", the enhanced and remodeled Trident Arm on its left arm, is capable of switching between Blitz Mode and Blast Mode. Also, it has been equipped with an energy booster that, at its maximum output, lets it exceed the speed of sound. 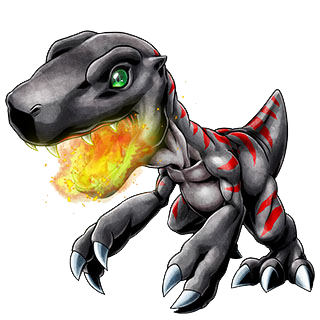 Similarly to regular Agumon, it became a more ferocious Digimon due to the effects of the X-Antibody. Agumon's violent hunting of prey, in which it relies solely on its high offensive power and acts purely on instinct, can only be called a rampage and is a fearsome sight to behold.

All previous abilities amplified, Missle Mastery, Earth Manipulation, Flight. Inherited Skills: Probability Manipulation (Those who acquire the power of the Digimental of Miracles, no matter what kind of predicament they fall into, are able to overcome it through that miraculous power. As such this Digimental is called a miracle item), Regeneration Negation (Low-Godly), Durability Negation, Sleep Manipulation, Dream Manipulation, Life Manipulation (Can drain life force), Poison Manipulation, Summoning (Can summon Devidramon).

All previous abilities amplified, Chaos Manipulation, Air Manipulation. Inherited Skills: Time Manipulation (Time Stop and Destruction), Atomic Destrution, Information Manipulation via Bloodsucking (Those how have their "blood" sucked have all their information drawn out and have their vital function cease and finally they die), Resurrection, Absolute Zero, Petrification, Transmutation, Spatial Manipulation (Can distort, erase and cut through space).

Self-Resurrection (The X-Antibody will do anything to keep its holder alive, even resurrect them from death), High Resistance to Existence Erasure (Those with the X-Antibody can resist multiple levels of Program X/Particle Worm which is a mass erasure technique from Yggdrasil) and Power Nullification (Can resist the effects of Particle Worm in which also negates all the abilities of those effected).

Attack Potency: Large Building level+ (Should scale to other Rookie Digimon such as Guilmon who can vaporize large chunks of concrete) | At least Large Building level+ (Far stronger than base) | Large Mountain level+ (Should be comparable to Meramon who could vaporize a lake) | Island level (Equal to if not superior to Folder Continent Meramon) | At least Large Island level (Ultimate level Digimon should be astronomically superior to Devimon who could split File Island apart), far higher for Folder Continent Natives (Even for Ultimates, the natives of File Island cannot even compare in power to the natives of the Folder Continent) | At least Large Island level (Far stronger than before), Bypasses Conventional Durability with Pandemic Destroyer | Planet level (Mega Digimon should be at least comparable to Ebemon who is capable of destroying entire planets) | At least Planet level (Far stronger than base).

Lifting Strength: At least Class M+ (Fought evenly and matched WarGreymon in strength who casually kicked a large skyscraper like a soccer ball)

Intelligence: While intellect varies among the species, just like regular WarGreymon BlackWarGreymon is a skilled warrior in combat.