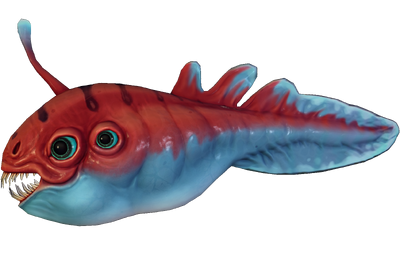 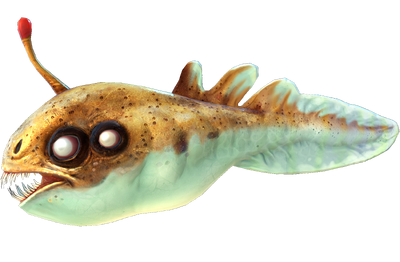 Biters are a small, aggressive fauna species, mostly dwelling in the Grassy Plateaus, Mountains, and the Jellyshroom Cave. The Biter is an extremely fast and territorial fish. It occasionally emits quiet growls and clicks. It will attack without hesitation if the player gets too close.

The Blighter is a subspecies of the Biter that can be found around the Blood Kelp Caves, Blood Kelp Zone, and The Lost River. Much like its relative, the Blighter is a very territorial creature and will attack the player when nearby.

Attack Potency: Below Average level (Able to easily kill small fish such as Peepers and Spinefish), Wall level in a group (A group of Biters can easily kill Ryley Robinson. Bio scan calculations suggest creatures up to 100x the biter's body weight could succumb to a focused assault by a pack of ten)

Speed: Peak Human (Can keep up with, and react to Peepers, which can swim at 10 m/s)

Intelligence: Animalistic (Biters are described as having a very small brain, with it making up only 2% of their entire body. Blighters are slightly more intelligent, using luring tactics to attract their prey due to their solitary nature instead of pack hunting like Biters)