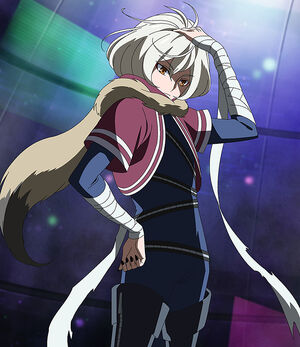 Bishin is one of the main antagonists of Hugtto Precure. He's the youngest member of the group and a test subject to their various experiments who appears to have an unstable personality. He's actually a hamster-like creature with the ability to transform into a human from the future who happens to be close friends with Harry and Listol but he, along with most of the inhabitant of their village living in poverty, was suffering from a terrible illness. They joined Criasu Cooperation in hopes that their problems will be solved, only for their village to be destroyed in the process. While Harry fled with Cure Tomorrow into the past, Listol and Bishin remain in the cooperation deeming Harry as a traitor.

Attack Potency: Planet level (Fought Cure Etoile and the rest of the Cures)

Speed: Massively Hypersonic (Capable of reacting to the Cures)

Durability: Planet Class (Was able to withstand attacks from the Cures)

Weaknesses: Easily gets angry into the point he occasionally breaks down.

Retrieved from "https://vsbattles.fandom.com/wiki/Bishin?oldid=5075393"
Community content is available under CC-BY-SA unless otherwise noted.