VS Battles Wiki
Register
Don't have an account?
Sign In
Advertisement
in: Tier 1, Tier Low 1-C, Tier 1-A,
and 48 more 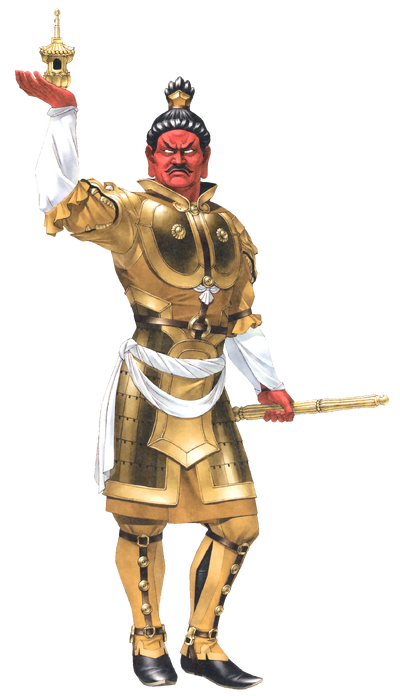 "Origin: India. One of the eight Hindu protector gods. Originally a leader of evil spirits, he was adopted into Buddhism as a god of fortune. Eventually he became one of the Four Heavenly Kings. With a spear in one hand and a pagoda in the other, he protects the north of Mt. Meru. As the strongest of the Four Kings, many warriors worshipped him. He is also the king of the yaksa and one of the Seven Lucky Gods."
—Shin Megami Tensei A-Mode DDS dictionary

Bishamonten, also known as Tamonten, is one of the Four Heavenly Kings featured in Buddhist teachings. His name means "He who hears everything" and he is the guardian of the North. He is also associated with the colour yellow, the mongoose and the umbrella. His attendants are the natural spirits, the Yaksha. Bishamonten is often considered to be a god of justice and war. He originated from the Hindu god of the north, Kubera, and the two are sometimes considered one-in-the-same.
—Shin Megami Tensei IMAGINE

Attack Potency: Low Complex Multiverse level (The most powerful of the Four Heavenly Kings, who are capable of collectively sustaining a barrier of power that maintains the separation between the Human World and the part of the Demon World that lies directly adjacent to it, the latter of which is a higher-dimensional plane that exists beyond time and underlies the material world, providing the basis for its existence) | Outerverse level (Exists as an archetype, a shapeless, fundamental unit of the collective unconscious inhabiting the realm of Atziluth, beyond the concept of dimensions entirely, and yet to be shaped into a lower state by the thoughts and emotions of humanity)

Intelligence: Extraordinary Genius. The knowledge held by human governments is said to pale in comparision to what Gods and Demons hold, and Bishamonten himself is said to hear everything that occurs in the world.