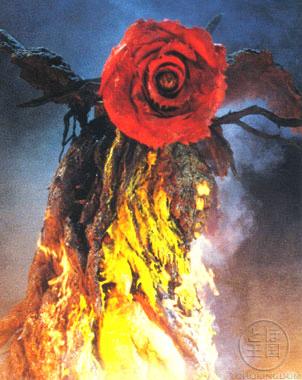 Biollante (ビオランテ, Biorante) is a genetically-modified rose kaiju hybrid created by Toho that first appeared in the 1989 Godzilla film, Godzilla vs. Biollante, and was the first kaiju opponent Godzilla battled during the Heisei era.

Biollante is a Godzilla, rose, and human tribrid created by Genshiro Shiragami. Shiragami originally created a human-and-rose hybrid in 1984 by splicing the DNA of his daughter, Erika Shiragami, who was killed in a Bio-Major-authorized bombing of his lab in Saradia, with that of a rosebush. Then, in 1989, Mount Mihara erupted, creating an earthquake that killed several roses, making Shiragami panic and splice the Godzilla DNA they had collected in 1984 with a single rose so that it could become invincible. The fusion eventually led to the rose becoming sentient and able to move on its own, and it continued to evolve into a giant monster. Biollante's wailing cries eventually led Godzilla to Lake Ashi, where the two briefly fought. Unable to keep Godzilla at bay, Biollante's rose form was quickly destroyed by Godzilla's Atomic Ray. The later faced each other again, only this time Godzilla was weakened from the JSDF's use of the Anti-Nuclear Energy Bacteria while Biollante had evolved since their last encounter. They clashed again, and though Biollante put up a far better offense than before and even appeared to have victory within a tendril's grasp, she still could not resist the devastating effects of Godzilla's Atomic Ray upon her own cellular makeup, and so conceded defeat with a tactical retreat by converting her body into spores and flying skyward, leaving the King of the Monsters to roar in victory and slowly make his way back to the open ocean.

Age: Several days, at most 5 years (her human/rose hybrid genes were created in 1984)

Attack Potency: Unknown (She was unable to harm Godzilla and her vine restraint on him was dispatched fairly easily) | Continent level (More powerful than her Rose Form, caused huge tremors by traveling underground, and was able to pierce through Godzilla’s hand and neck with her vines)

Durability: Unknown (Was dispatched by Godzilla’s fairly easily) | Continent level (Could fight Godzilla until he was weakened by the anti-nuclear bacteria), regeneration makes her hard to kill.

Stamina: High, but lowers significantly if her cellular makeup is damaged in any way.

Intelligence: Above average for a kaiju.

Weaknesses: Nuclear energy sources such as Godzilla's Atomic Ray can destabilize her cellular makeup and harm her greatly.