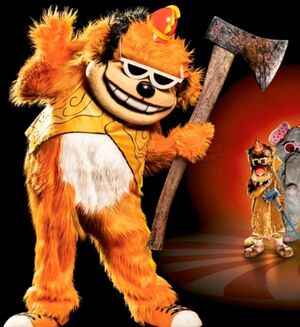 Bingo is one of the main antagonists of the Syfy film, The Banana Splits Movie.

Powers and Abilities: Superhuman Physical Characteristics, Vehicular Mastery (Of the Banana Buggy), Weapon Mastery (Can use basically anything as a weapon, including a lollipop or key), Self-Sustenance (Types 1, 2, and 3), Inorganic Physiology (Type 2), Stealth Mastery, Preparation (Was able to create a exhaust pipe, that produces a large fire stream), Pain Resistance (Seems enable to feel pain), Berserk Mode (via "show must go on" programing), Immortality (Type 2; At the end of the film it is shown they are still "alive" in completely mangled states), Possibly Telekinesis (Could close a door and lock it without being seen anywhere near the door)

Attack Potency: Wall level (Could harm and rip apart Snorky, who is a large metal robot. Comparable to the other splits who can bash in human skulls with prop hammers, and have the Banana Buggy which is this level)

Speed: At least Peak Human normally (Can attack normal humans before they can react), Superhuman with Banana Buggy (Comparable to a smaller car)

Striking Strength: Wall Class (Comparable to the other Splits, who killed dozens of adults in an unknown, but short, period of time with no injuries)

Durability: Wall level (Survived blows from Smorky, survived a small fall, comparable to the other Splits who can survive attacks from blunt metal weapons)

Stamina: High (via being a robot)

Intelligence: Above average (Was smart enough to destroy all the phones, set up the fire exhaust, and skillfully use multiple weapons)

Start a Discussion Discussions about Bingo (The Banana Splits Movie)