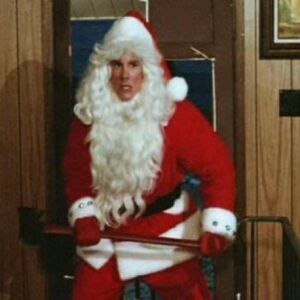 Billy Chapman is the main antagonist of the film Silent Night, Deadly Night. When Billy was a boy, his parents were brutally killed by a criminal dressed like Santa Claus. This coupled with a speech from his mentally ill grandfather gave Billy some PTSD for the holiday icon. This all went wrong when he was forced to dress as Santa and witness a coworker being sexually assaulted like his mother was. This is what began his Christmas murder spree.

Powers and Abilities: Superhuman Physical Characteristics, Skilled Marksman, Weapon Mastery (Is shown to be skilled with his axe, as well as a bow and arrow. He can seemingly use anything in his environment as a dangerous weapon)

Attack Potency: At least Street level (Could easily overpower fit humans, decapitate his victims, embed a hammer into a man's skull, etc; His ax would be this tier considering it is similar to a fire axe), likely Wall level (Easily smashed through a wooden door, shattering it)

Speed: Athletic Human (Can keep up with fit humans)