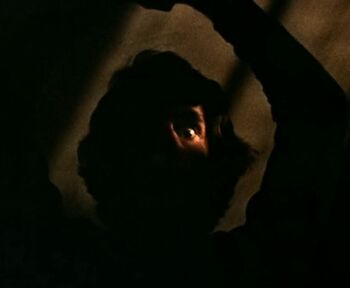 Billy is the mysterious antagonist of the holiday horror film, Black Christmas. His origins and last name are never given in the film, and his motives are unclear but blatantly sadistic. He is a complete mad man, who sneaks into a sorority house and kills the occupants.

Powers and Abilities: Peak Human Physical Characteristics, Weapon Mastery (Can easily use almost anything in his environment as a deadly weapon and with proficiency. This includes bags, knives, a glass unicorn, hooks, etc), Social Influencing (Was able to trick Jess into thinking Peter, her boyfriend, was the killer. Billy also uses this to frighten his future victims, as well as taunt them), Stealth Mastery (Billy is extremely stealthy, able to sneak around the sorority house, somewhat out in the open, even when the sisters know he has been killing and watching them. He was able to avoid detection while he was still killing the sisters), Skilled Climber

Attack Potency: Street level physically (Overpowers and kills Clare Harrison, Janice Quaife, and Phyllis Carlson while seemingly unarmed), varies with improvised weapons (Due to the fact he doesn't carry around any weapons, he uses the objects in his surroundings to commit some of his murders. This can include anything from plastic bags to a standard blade)

Speed: Peak Human (Was able to blitz multiple humans, including a police officer)

Standard Equipment: None (All the weapons Billy uses are those he finds in his location)

Intelligence: Billy, while very mentally unstable, is extremely intelligent. He was able to manipulate the sister, making the paranoid and scared, as well as convince Jess her boyfriend was the killer. He has shown to be very intelligent when it comes to his sneaking, as well as being able to wield almost anything as a weapon.

Weaknesses: He is insane, and can go it fits of rage when he is disturbed or intruded upon.

Note: This profile only covers Billy from the 1974 film, Black Christmas, and not the 2006 reboot.