VS Battles Wiki
Register
Don't have an account?
Sign In
Advertisement
in: Unknown Tier, Variable Tier, Tier 7,
and 89 more 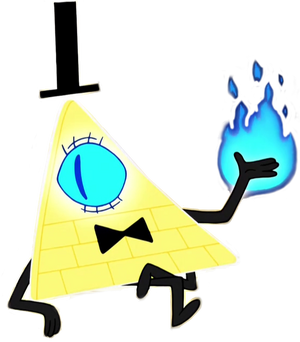 Bill Cipher is a triangular dream demon who exists in the Mind/Dreamscape and the true antagonist of Gravity Falls, secretly being responsible for many of the most important events of and leading up to the show. Years ago, Bill made contact Stanford "Ford" Pines, posing as a muse who revealed himself only once every century to a special individual. Tricking Ford into thinking of him as a friend, Bill promised the answers to all of his questions so long as Ford allowed him access to his mind. Ford eventually built a trans-universal portal that he believed would bring answers to important questions until he discovered the true purpose of the device. The portal would act as a connection between the real world and the realm of nightmares, allowing Bill and his friends to pour through, leaving their realm to claim another universe. Ford shut the portal off and denying Bill access to the universe. Years later, after Bill reveals himself to more members of the Pines family and begins to stir up even more trouble in Gravity Falls, he inches his way closer to his goal. As of "Weirdmageddon Part I", he has managed to finally achieve physical form and enter the real world and is beginning to spread madness and chaos across the globe.

Tier: Unknown | Varies physically depending on his size, Low 7-C, possibly 6-B with Energy Projection, up to 4-A via Size Manipulation & Reality Warping. Eventually 3-A via causing a rip in a dimension

Name: Unknown (His true name can cause madness in human beings), goes by Bill Cipher (As a dimensional username), Bipper (When possessing Dipper Pines), Creature No. 326

Age: At least 1 trillion years old (He has been trapped in the Dreamscape for this long)

Incorporeality (While in his Mindscape/Dreamscape form, exists as a disembodied consciousness made out of pure energy. Ford Pines also stated he was a non-corporeal entity), 4th Wall Awareness (Is aware of the real world and can "see" us), Social Influencing (Described as being highly charismatic, and often aims to reach his personal gains through deals & deceptions, previously making others believe incorrect notions), Immortality (Types 1 and 6), Quantum Manipulation (By technicalities, Bill is made up by mathematical probability from existing in a state of quantum uncertainty based on the amount of information found about him, since he is implied to contain numbers inside his body & geometrically-shaped as well mathematics form), Dream Manipulation and Nightmare Inducement, Flight/Levitation, Teleportation, Shapeshifting, Body Control, Elasticity, Self-Size Manipulation, Accelerated Development, Berserk Mode, Rage Power, Immersion (Was implied that he used to be in a comic book), Mind Manipulation, Telepathy (Can read thoughts and know what others are thinking), Memory Manipulation (While possessing Ford, Bill deleted a word from his vocabulary and replaced it with another. Listed "Eating childhood memories" as fun), Sleep Inducement (Put Mabel to sleep with a snap of his fingers), Clairvoyance (Can see through paintings and representations of himself. Can see everything those who summon him see), Precognition (Quickly foresaw Dipper waking up, screaming and acting in a specific way, later in the same episode asked Soos if he wanted to hear the exact time and date of his death. Told Ford to not have a heart attack as he wasn't 92 yet, upon meeting him. Replied being asked twice if he could see the future by claiming to see the questioner's future, and that he could "see a kaleidoscope of temporal probability with fluctuating range", seeing in it "infinite alternate versions of [himself] in infinite alternate dimensions answering [the] question with infinite variation", one of them having "answered by vomiting a stream of blood and prime numbers out of his third mouth!"; Alternate dimensions were shown to have somewhat similar alternate versions of characters, meaning that other Bills likely gave more normal replies), Limited Possession (Could possess a puppet without making any deal), Time Travel (Appeared in the dreams of Blendin, who is from the future), Dimensional Travel, Portal Creation, Technology Manipulation, Data Manipulation, Fire Manipulation, Resistance to Madness Manipulation (One peek into the Nightmare Realm drove Fiddleford briefly insane and made him poetically describe a future event; Bill lived there for 1 trillion years)

Resurrection (By speaking a special incantation, can return to life after being erased after unknown periods of time and methods). If Bill tricks his target into making a deal with him he gains access to: Soul Removal and Possession

As before, minus his powers inside a mind, Regeneration (Low-Godly. Lacked a physical form and easily created one for himself. Would have been able to form himself in other ways if he wanted to. Repeatedly regenerates damage done to his body), Large Size (Type 0 at best normally. His standard size varies between being slightly smaller than a human and big enough to use a petrified Ford to scratch his back), Immortality (Types 2 and 3), Superhuman Physical Characteristics, Magic (His powers were described as magic by Ford), Reality Warping (Warped the show's intro into featuring him. Shown that his powers could be use to play ping-pong with a planet), Time Manipulation (When starting Weirdmageddon stated that time was dead while showing a clock and birds slowing down until stopping, it's unknown how others could deal with this, later Blendin described the place as "time dodge". Killing Time Baby gave him improved control over time. Listed "Making time stop forever" as fun), Law Manipulation, Causality Manipulation, Physics Manipulation (Stated to be able to free/rewrite the reality from any kind of law and causality system), Pocket Reality Manipulation and BFR (Created Mabelland and trapped Mabel there), Duplication (Briefly demonstrated in his battle against Shacktron), Self-Sustenance (Types 1, 2 and possibly 3), Madness Manipulation (Can create bubbles that can sometimes induce madness into whatever it touches, his true name can cause ecstasy and frenzy to mortals, and they would disintegrate into vapor), Transmutation (Transformed a person into a chair. Transformed a tree into a tentacle and a utility pole into disembodied leg. Transformed six people into banners with a snap of his fingers. Shown that his powers could be use to play ping-pong with a planet, despite its natural structure disallowing elasticity and rebound), Petrification (Accomplice in turning dozens of persons into statues. Turned Stanford into gold, twice), Biological Manipulation (Shuffled "the functions of every hole" in Preston's face), Life Manipulation, Gravity Manipulation, Summoning, Astral Projection, Forcefield Creation (Demonstrated here), Intangibility (Shown here), Matter Manipulation (Controls matter. Threatened to disassemble Dipper and Mabel's molecules), Spatial Manipulation (Controls space), Energy Projection, Energy Manipulation, Durability Negation (Via Disintegration and many other powers), Weather Manipulation (Created a storm), Electricity Manipulation, Power Bestowal (Bill Cipher displayed this when doing this to his minions and can grant wishes by deals), Animal Manipulation (Mabelland was made out of bugs)

Attack Potency: Unknown (Originally came from the 2nd dimension, which he described as flat. Burned and destroyed said dimension with every 2-Dimensional being in it. Would describe gaining a 3-Dimensional physical form is "a multi-dimensional makeover"), Varies via Possession (Doesn't exist in the physical world unless he's possessing someone or an inanimate object), able to ignore durability in some ways | Varies physically depending on his size (His power displayed changes drastically based on the size he takes. The standard size he showed while confined within Gravity Falls was kid-sized or around 6 meters long, if not more), Small Town level (While increased in the latter size, he made a giant crater by smashing his fist against the ground), possibly Country level with Energy Projection (Annihilated Time Baby, who he claimed weighs 9 trillion tons, though it may have been a mere insult), up to Multi-Solar System level via Size Manipulation & Reality Warping (Shown that Ford with his powers could use them to grow larger than a galaxy in length while being smaller in width and seemingly remaining the normal speed of his moments when seen in a third-person perpective). Eventually Universe level via causing a rip in a dimension (Had a rip into the universe Time Baby stated that, if continued, could destroy "the very fabric of existence" as visualized by an explosion eclipsing some area in space, and Blendin knew from another point in time that Bill destroyed "the entire universe" because of this event. The rip presumably started with Bill's arrival to that universe, days passed without it getting notably worse, and the destruction would be an unknown time later [See note below]), able to ignore durability in many ways

Speed: Unknown, Varies via Possession | Subsonic+ normally (Closed a gap of several meters very suddenly), up to Massively FTL+ via Size Manipulation & Reality Warping (Shown that Bill could use his powers to grow around Earth's size and quickly travel interplanetary distances, while Ford with his powers could grow around the size of a galaxy while seemingly remaining the normal, human speed of his moments when seen in a third-person perpective)

Range: 2-dimensional. Varies via possession | Varies physically (Due to changing his own size), Universal+ with some of his powers, Interdimensional with Summoning (Pulled a group of interdimensional monsters into the main Gravity Falls universe), Multiversal+ with Dimensional Travel (Stated to be a threat to the entire multiverse, which contains infinite universes, implying he can at least travel to any of those)

Intelligence: Extraordinary Genius. Is said to know "lots of things", such as the truth of many well-known conspiracies as well as future events, like the destruction of Gideon-bot and that Gideon Gleeful would go to prison. Bill is also able to look through the eye of anything that is made in his image, allowing him to know what occurs even when he isn't around. Tricked and terrorized great minds in history "since time began"

Weaknesses: Will do irrational things at times and he is extremely cocky and arrogant. His regeneration seems to take a bit of time as he complained about how long it took him to regenerate his eye back. While he is in someone's mind, memory erasure can be used to erase him. However, as hinted by clues such as a hidden incantation Bill spoke in reverse, he can eventually return from being erased

He exists in a state of Quantum Uncertainty

Note: Bill being a threat to the multiverse doesn't indicate that he is able to destroy all of it. It simply means that he isn't a localized threat, as he has the ability to travel to other universes.

Blendin knowing that the universe was destroyed means his best feat explicitly can't be Low 2-C, as the timeline isn't destroyed by it. That knowledge could have come from the Time Police in the future, or when Blendin fled he could have travelled to another point in time to know that the universe would be destroyed, since he mentioned it as something that already happened.

Stanford Pines was worried that Bill might destroy the universe despite how Bill only told him his delusional plan of chaotically ruling it over, while causing notably less damage around in the universe but without destroying it all, meaning that Ford likely knew what Bill could cause. "The very fabric of" something and mentioning "existence" don't necessarily mean the entirety of something and all the realities in a verse respectively, unless proven, and Time Baby clearly referred to the universe as that was what Blendin said was destroyed and what Ford was repeatedly worried that Bill might destroy. 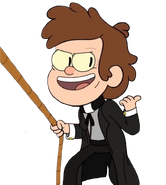