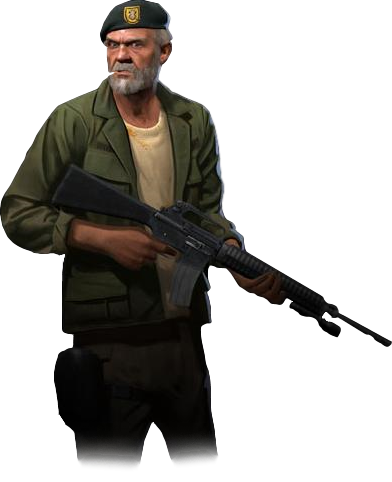 William "Bill" Overbeck is one of the four playable Survivors in Left 4 Dead.

He is a Vietnam veteran who served in the US Army 1st Special Forces Group, and is also noticeably the oldest of the group in the late sixties. It took two eventful tours in Vietnam, a handful of medals, a knee full of shrapnel, and an honorable discharge before the unthinkable happened: Bill ran out of wars. But now an army of infected has declared war on humanity. After decades of aimless drifting and dead-end jobs, Bill's finally gotten back the only thing he ever wanted: an enemy to fight.

Tier: 9-C by himself. 9-C to 9-B with firearms and grenade launcher.

Powers and Abilities: Superhuman Physical Characteristics, Survivalism, Firearms and melee weapons proficiency, Statistics Amplification, Healing, Can struck targets with fire, Explosion Manipulation, Resurrection, Limited Resistance to Disease Manipulation (Being carriers of the infection, the survivors are complete immune to the Zombie Virus. However, they are an extremely danger to any human they find that are not immune to the virus, since they can transmit the virus to others)

Striking Strength: Street Class, Wall Class with melee weapons (Can kill a Charger in only a couple of strikes)

Durability: Wall level (Can withstand various hand-to-hand attacks of zombies and the Tank, who can break metal doors and walls easily. Comparable to the other survivors)

Stamina: Superhuman (Can fight with thousands of zombies in several days without any retreat, Comparable to the other survivors)

Retrieved from "https://vsbattles.fandom.com/wiki/Bill_(Left_4_Dead)?oldid=5541743"
Community content is available under CC-BY-SA unless otherwise noted.