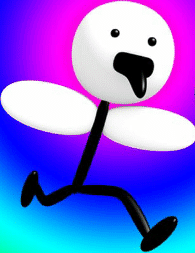 Bigley is the main antagonist of the videogame Bigley's Revenge, seeking the extintion of "dank memes", his species joined forces with the Cucumber Dog and the Illuminati

Attack Potency: Street level (Can one hit kill the playable character, a soldier)

Speed: Below Average Human (Moves very slowly despite its size)

Stamina: High (Can still go on even after receiving several wounds all over his body)