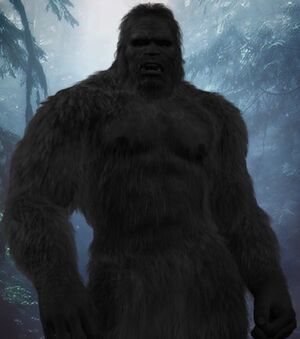 Bigfoot (the most common name of this species) is a very mysterious and powerful cryptid. The origin and status of Bigfoot has been debated and is thought to either be a large ape, an alien, a forest spirit, or some type of super species.

Powers and Abilities: Superhuman Physical Characteristics, Incorporeality (Is believed to be a forest spirit), Invisibility (Is able to cloak itself), Magic, Teleportation, Stealth Mastery, Healing (Used on incredibly sick and dying humans), Camouflage (Natural camouflage), Light Manipulation (Glowing eyes, are followed by a "light orb"), Enhanced Senses (Sent, sight, and hearing), Portal Creation, Genius Intelligence, Telepathy (Are psychics), Aura (Their presence is said to be powerful and somewhat overwhelming, even when not in view), Fragrance Manipulation, Large Size (Type 0), Fear Manipulation (The sight of them installs great fear in the view, causing some people to require counselling or to be diagnosed with PTSD. They cause humans to be unable to complete basic tasks and even question reality), Longevity, Flight/Spaceflight and Light Manipulation (via spaceships), Vehicular Mastery (of spaceships)

Speed: Superhuman movement speed (Is much faster than humans), Massively FTL via Spaceships (Traveled from a different solar system in a short amount of time)

Stamina: High (Comparable to other large apes, carried a full grown man multiple miles without being slowed and only put him down when he had reached his home)

Intelligence: Genius (Created and piloted advanced spacecraft to earth. Is very versed in forms of magic and spells)