VS Battles Wiki
Register
Don't have an account?
Sign In
Advertisement
in: Characters, Sonic the Hedgehog, Cats,
and 40 more

Big the Cat is a large purple cat who lives in Mystic Ruins and spends most of his time fishing with his pet frog, Froggy.

Statistics Amplification (With Speed Shoes, Golden Gloves and Speed Bar), Healing (With Health Seeds, Health Roots, Health Leaves, and Antidotes), Elemental Manipulation (Of Water, Electricity, Ice, Wind, and Earth varieties via elemental Rings), Fear Inducement (With the Spooky Charm), Resurrection (With Angel Amulet and Ring of Life), Life-Force Absorption (With Nocturne Blade), Purification (Type 3 with Cure All Spray). With Chao: Statistics Amplification (With Cheezlet and Blayze, attacks do much more damage), Damage Reduction (With Velk and Gibber, damage from attacks are greatly reduced), Healing (With Stebsly and Joy, vitality is regenerated over the course of a fight), Resurrection (With Ovus, their partner is automatically brought back up to three times in one battle), Probability Manipulation (With Koolet, Belgog, Fimbley, and Stugs, enemy attacks have a greater chance of missing. Churdle and Oldarg give a higher chance of hitting the opponent. Keroyo increases the chance of an enemy fleeing. Spartoi grants a chance to instantly knock out the opponent with every attack done), Shield Creation (Can make passive shields of fire, water, wind, lightning, and earth that stay even after being hit), Elemental Manipulation (Can imbue his attacks with fire, water, wind, lightning, earth, and ice), and Damage Transferal (With Pooki, damage taken is split between teammates). With Forcejewels: BFR, Barrier Creation (Can create barriers for a limited amount of time that others can't pass), Teleportation (Can teleport others to himself, teleport himself to others, swap places with an opponent, or teleport himself or others to a random location), Body Puppetry (Can force an opponent to move or use their items)

Attack Potency: Large Planet level (Physically the strongest member of Team Rose, making him stronger than Amy and Cream) | Small Star level (Capable of fighting against Imperator Ix with the help of others)

Stamina: Very high due to his big body

Intelligence: Low, though he is a very experienced fisherman, is capable with technology and is also an extremely skilled swimmer and climber. He is also a very capable combatant as he fought Metal Madness alongside the rest of Team Rose and could even fight Gizoids, who have thousands of years of combat experience.

Weaknesses: Rather idiotic outside of combat and fishing 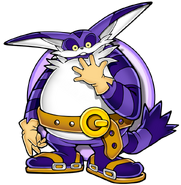 Always Together, written in the Sonic Comic