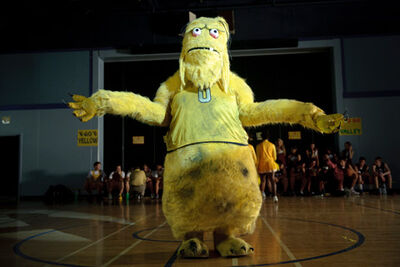 Big Yellow is the primary antagonist of the R.L. Stine's The Haunting Hour episode, "Mascot." It appears to be a mascot costume of unknown origin or design, with its most notable features being its dirty yellow fur and ugly face with bulging eyes. However, when it finds its position as the Yellow Valley High School mascot being threatened, the people who attempt to remove Big Yellow end up disappearing shortly after, and Big Yellow always manages to continue his rein as Yellow Valley's only mascot.

Powers and Abilities: Body Control (Able to have his head removed and still remain functional), Stealth Mastery, Putrid smell, Technology Manipulation (Can seemingly manipulate the lights, as well as limit the messages/calls between Willie and Drake on their phones), Natural Weaponry (Sharp claws), Enhanced Hearing (Can hear the protagonists talking about him from far away on a somewhat noisy basketball court), and Longevity (Has remained the school mascot for years with no signs of aging)

Lifting Strength: Likely Above Average Human (He is able to carry two high schoolers,which can range from 85 to 160lbs each)

Mary Muldoon (Hit and Misdemeanor) Mary's Profile (Speed was equalized, and Mary had her gun with two bullets)