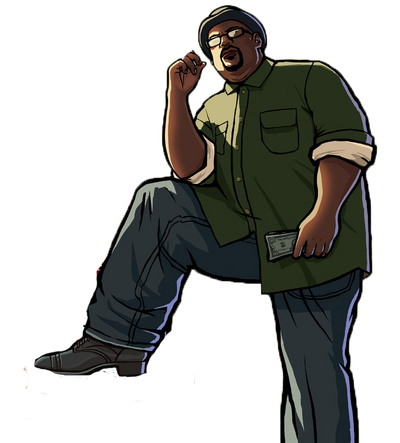 Lifting Strength: At least Athletic Human (Has no problems moving around in thick body armor, as seen in his fight with CJ)

Durability: Human level, Wall level with Body Armor (Can take an overwhelming amount of shots from CJ's weapons and can take hits from CJ himself, who can easily kill armored police officers and destroy cars with just a few hits)

Stamina: Very high (In the mission "Drive-Thru", he ate 7,540 calories worth of food in one sitting and didn't suffer from any ill-effects afterwards. Can run with CJ; however, he struggled to keep up. Can also participate in long term gun fights)

Intelligence: Average (Can speak Spanish and made deals with the Los Santos Vagos and the Russian Mafia)

Weaknesses: His diet and health habits make him very obese.

Superman (Smallville) Superman's profile (Speed was equalized, and 9-B forms were used but Smoke only had a baseball bat)

Hank Hill (King of The Hill) Hank’s Profile (Both were 9-B, Smoke is fully equipped, Hank had pistols, a shotgun, and a rifle, Speed was equal, Both were bloodlusted, Both started 30 meters away, Fight was in Wal-Mart)