Big Red is a gigantic entity found deep in the Sewers. It will instantly eat and swallow Madotsuki. Inside its stomach is a whole part of the Dreamworld, including the Windmill world and the Block World, linked to it.

Powers and Abilities: Superhuman Physical Characteristics, Large Size (Likely Type 5 to Type 6; larger than the Windmill World) Resistance to Time Stop and Mind Manipulation, Immortality (Type 8. Reliant on Madotsuki. It will always come back, as she re-creates it subconsciously)

Note: The size of the Windmill world is unknown. However, worlds similar in appearance and function have shown to be of quite large sizes, such as the Snow World holding a night sky filled with stars, or the Puddle World containing a moon in its sky. 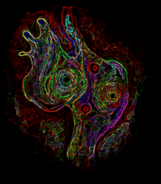 Background of the Windmill world
Add a photo to this gallery