VS Battles Wiki
Register
Don't have an account?
Sign In
Advertisement
in: Characters, Looney Tunes, Rabbits,
and 15 more 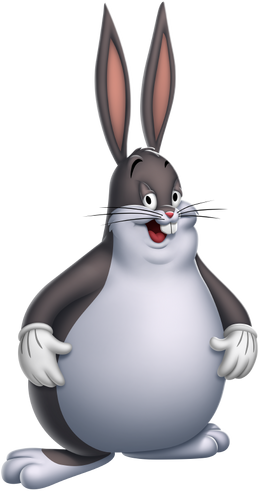 Big Chungus is one of the many Toons available in Looney Tunes World of Mayhem, being born as a Bugs Bunny persona from Marvin the Martian's device.

Powers and Abilities: Superhuman Physical Characteristics, Toon Force, Healing (Passive, after taunting, Big Chungus can restore his health over time), Power Bestowal and Statistics Amplification (Via Chungus Amongus, which raises the maximum vitality of himself and allies), Statistics Reduction, Power Nullification (Can suppress stat drops targeted at him), Resistance Negation (Can negate resistance to Statistics Reduction), Size Manipulation (Can turn himself far bigger), Large Size (Type 1, while using Flub from Above), Regeneration (Mid-High, just like other Toons, can recover from being turned into dust from Star-Pharaoh Marvin's move)

Attack Potency: Wall level (As a legendary-level Toon, he should be above the likes of regular Bugs Bunny, which can harm others that can harm him), Small Building level with Flub from Above (Yields this much power)

Speed: Subsonic (Comparable to other Toons, which can move like a blur)

Durability: Small Building level (Can take hits from explosives, falling lockers and so on. Withstands the Flub from Above move)

Stamina: Very high (As a defensive Toon, Big Chungus has a notable amount of stamina)

Range: Standard melee range, higher with Flub from Above