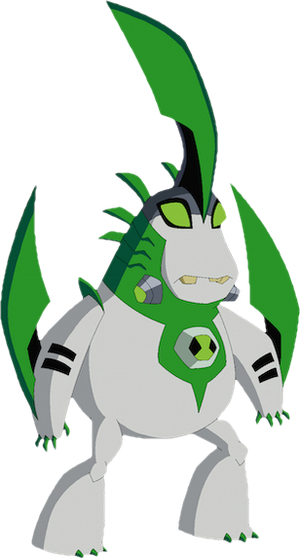 Big Chuck is the combination of Upchuck's and Way Big's DNA. He can only be accessed by using the Biomnitrix.

Powers and Abilities: Superhuman Physical Characteristics, Can shoot cosmic rays, Can create cosmic storms, Can ingest inedible objects and shoot them out as energy blasts

Attack Potency: Large Planet level (As a fusion of Way Big and Upchuck, he should be at least comparable to them both)

Lifting Strength: Class Z (Should be as strong as Way Big)

Range: Planetary (Way Big's cosmic ray traveled all the way from Earth to the Moon while pushing Evil Way Big along with it)

Weaknesses: If a To'kustars fin is damaged, it causes paralyzing pain throughout their body. If Big Chuck does not spit out something he ingests, he will become fat and rendered immobile until he spits it out. Big Chuck has a limit to how many objects he can swallow at once.