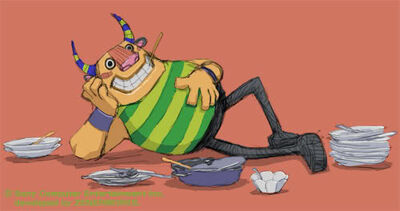 Big Bull is an over excited bull from the underworld who cares for only fighting and opening his own fighting dojo. During his time as an Evil King, Big Bull was confronted by Ari and his companions and after a fierce battle was defeated and lost his title as an Evil King and decided he would join their group so he could fight other strong foes.

Attack Potency: At least Multi-City Block level (Stronger than Evil King Chairman who had enough power to incinerate a building which would require this level of power) | Large Star level (Fought Beiloune after he classified himself with the full power of Classification)

Speed: Subsonic (Moves like a blur) | At least Subsonic (Faster than before)

Intelligence: Below Average (While he is a capable figher, his overall intelligence isn't good)

Weaknesses: Ice Attacks, He is not a "Deviant" on the level of Ari so his resistances aren't as high.

Retrieved from "https://vsbattles.fandom.com/wiki/Big_Bull?oldid=5565213"
Community content is available under CC-BY-SA unless otherwise noted.