VS Battles Wiki
Register
Don't have an account?
Sign In
in: Characters, Metal Gear, Konami,
and 54 more 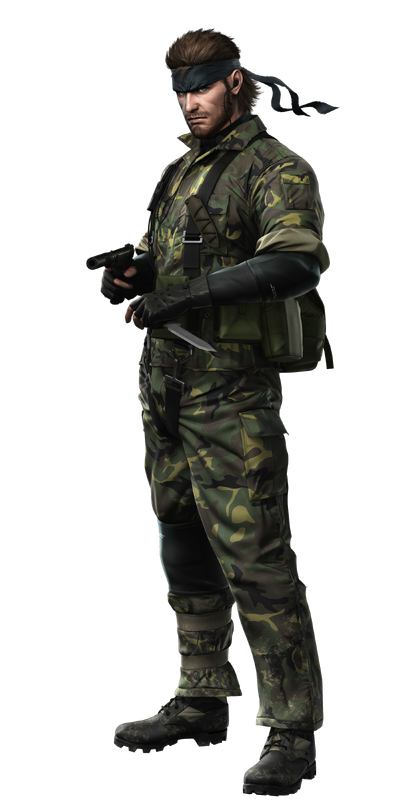 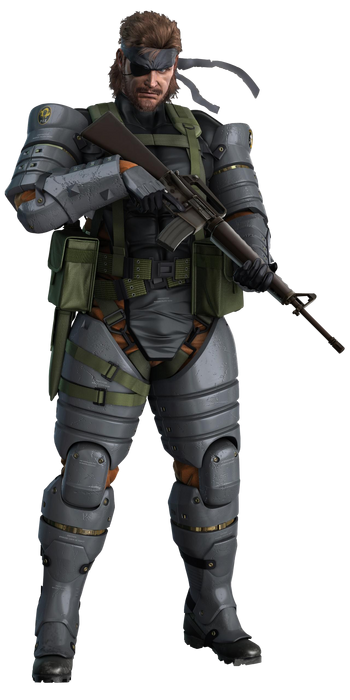 The man known as John, or Jack, the "Greatest Warrior of the 20th Century", was one of the sons of the Boss. He once had the code name Naked Snake during Operation Snake Eater - making him the first to bear the alias "Snake." After completing the mission and defeating The Boss, he earned the title Big Boss.

Misinterpreting his late mentor's will, he sought to create a world where soldiers would always have a place and would not be tools of warring governments. He was one of the Patriots' founding members, alongside his former support team, Ocelot, and EVA. Ultimately, following the Les Enfants Terribles project, in which the Patriots created a set of clone sons (Solid, Liquid, and Solidus Snake) from his DNA, Big Boss defected from the Patriots and set out on his own.

Tier: 8-B, higher with weapons

Powers and Abilities: Superhuman Physical Characteristics, Genius Intelligence, Master of Stealth, Infiltration and Espionage, Expert Pilot, Master of CQC, Acrobatics (Scaling from Solid Snake), Expert Marksman, Enhanced Senses (Able to detect enemies in a multitude of ways from long distances with equipment, can see ghosts), Healing (Medium and heavy injuries via first aid, can heal from broken bones and gunshots in a matter of seconds), Accelerated Development (Skill and Statistics; went from being severely less skilled than The Boss to being at least comparable to her in a short timeframe, with The Boss herself confirming that he had gotten both stronger and more skilled since their last fight) Limited Technology Manipulation (Via Chaff Grenade, which can confuse radars, fool cameras, radios and some types of UAV), Status Effect Inducement (Can stun his opponents with much of his equipment, such as the stun rod), Minor BFR (via Fulton recovery), Camouflage, Social Influencing (He's a legendary warrior, and soldiers are incredibly attracted to him, showing nothing short of fanatical loyalty towards him. Charmed Ocelot after a short fight, to the point where he basically plotted the entirety of the MGS story just to bring him back to life), Sound Manipulation (The Spirit Camo renders him completely silent and the sneaking suit dampens the sound of his footsteps), Extrasensory Perception and Non-Physical Interaction (Can see and interact with ghosts, could see The Sorrow), Information Analysis (Capable of deducting Ocelot's preferred weapon type just by briefly looking at how his elbow reacted to the recoil), Explosion Manipulation (With Explosives), Light Manipulation (With Stun Grenades), Electricity Manipulation (With Stun Rod), Fire Manipulation (Via White Phosphorus Grenades), Sleep Inducement (Via tranquilizer darts and sleeping gas), Smoke Manipulation (Via Smoke Grenades), Limited Air Manipulation (With the Tanegashima which has a 1/3 chance of summoning a whirlwind), Invisibility, Resistance to Extreme Heat, Cold and Poisons (The Sneaking Suit provides insulation from the environment and protection against toxins), Mind Manipulation (Resisted Gene's attempt to mind control him, scaling from Solid Snake), Radiations (Just like The Boss, he was an atomic-test subject, and as such, resistant to radiations. Suffered no repercussions from the Davy Crocket's radiations), Sleep Inducement (Resists the effect of The End's sleeping darts, which are even more powerful than his own, which are themselves capable of instantly putting people to sleep), Minor Resistance to Precognition (Ursula and Elisa couldn't agree on what his future would be, with their predictions being 100% accurate and never diverging), Enhanced Senses (The sneaking suit prevents him from being detected via thermal scanner), Extreme Pain Tolerance (Withstood Volgin's torture without giving him any information, endured the pain of a heart attack in his old age)

Attack Potency: City Block level (Defeated Volgin, whose body carries a charge of 10 million volts, and pushed up Cocoon. Can also trade blows with those capable of harming him), higher with weapons

Stamina: Extremely high. Big Boss has incredible endurance and is an expert in wilderness survival, going on with little equipment at the beginning of Operation Snake Eater and surviving off of the wildlife for days as he performed his mission shortly after being gravely injured by the Boss. Even after Volgin tortured him to near death, electrocuting him and beating him down for an extended period, Big Boss quickly recovered and continued in his mission, going on to defeat both Volgin and the Boss. Even in his dying moments, as FOXDIE claimed him, he was able to keep on moving when others had instantly died.

Range: Standard melee range, tens of meters to hundreds of meters with weaponry.

Intelligence: Genius. It is not for no reason that Big Boss is regarded as the best soldier in the world. Having been trained since a young age in combat, espionage, and survival by the Boss, Big Boss is a genius fluent in many languages and with extensive knowledge in subjects such as psychology. He is exceedingly skilled in CQC, having developed the art alongside the Boss herself. He has used it to disarm and defeat others, ranging from the likes of Volgin to fellow masters of the art, such as Ocelot, Solid Snake, and the Boss herself. He can analyze situations quickly and act intelligently even under pressure, working to heal his injuries while on the battlefield and treating EVA with Para-Medic's guidance, and can expertly lead his nation of Outer Heaven and all its soldiers.

Weaknesses: Big Boss is missing an eye, he's haunted by the memory of his mentor, The Boss