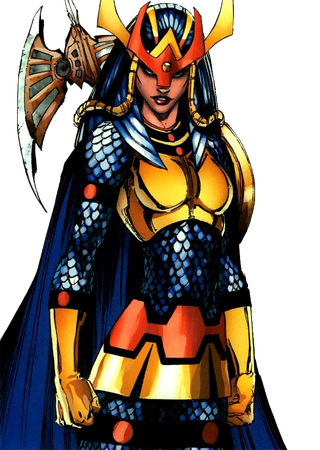 Once a member Darkseid's Female Furies, a group of female Apokoliptian warriors loyal to the God of Evil himself, Big Barda's life changed when she met the rebellious Scott, Highfather's grandson who had been placed in Darkseid's care as part of a peace treaty. The two New Gods soon fell in love and desired to escape Darkseid's clutches. They eventually succeeded, escaping to Earth in the process. There they adopted the identities of Barda and Scott Free, a pair of escape artists while secretly using their New God abilities to fight crime and entertain audiences around the world.

Speed: Massively FTL+ (As a particularly powerful New God, she has proven herself to be as fast as Kryptonians like Superman as well as Amazons like Wonder Woman)

Stamina: Very high (Barda's New God physiology allows her to operate for at least 48 hours before tiring and can last in protracted battles against other New Gods like the Female Furies)

Range: Extended melee range with her Mega Rod, several dozen meters with her Mega Rod's concussive blasts (Can rip through the hull of a warship), At least Intergalactic with Mega Rod (She teleported Lobo to another Galaxy), Cross-universal with her Mother Box (Can reach across space-time and into other universes)

Intelligence: Having been groomed from an early age to be the leader of Darkseid's Female Furies, Barda is a master of all weapons and forms of hand-to-hand combat, utilizing everything from swords, to clubs, to rifles and cannons with great proficiency and stalemating combatants as skillful as Wonder Woman. She was able to thoroughly trounce the combined forces of the Female Furies while fighting alongside Wonder Woman. In addition, like most New Gods, Barda is naturally more intelligent than most humans due to her exposure to the Source. This allowed her to help her husband Scott design and construct numerous dangerous traps for use in his death-defying acts.

Weaknesses: Like all New Gods, Barda is vulnerable to Radion, a substance that can potentially bypass her natural durability if weaponized against her in the form of a blaster or a bomb.