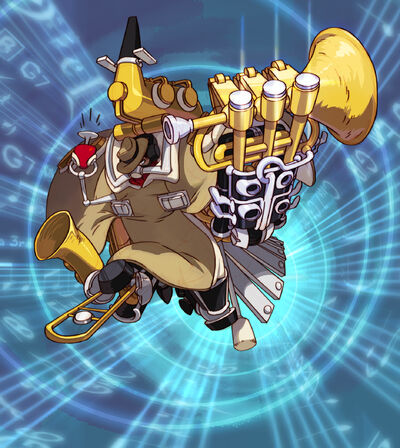 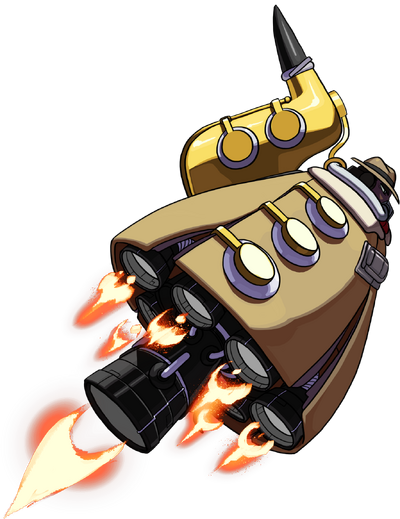 Ben Birdland has seen a lot in his time, including the worst of the Grand War. But nothing was worse than what he saw as a beat cop in New Meridian. When he ran afoul of his crooked unit he was given a violent early retirement, and his broken body was left to spend the rest of its days in an iron lung.

That would have been the end of Ben’s story if it hadn’t drawn the ears of the Anti-Skullgirl Labs. With little left to lose, he agreed to be rebuilt with their experimental procedures. Melded with the machinery that allows him to breathe and a powerful an array of pneumatic weaponry, he was reborn as “Big Band.”

Now a senior member of Lab 8, he’s become a father figure of sort to the younger ASG soldiers. A firm believer in their cause, he has stayed with the project through its controversies and still sees his place on the front lines against the Skullgirl. His technology may be dated, but he more than makes up for it with experience and fortissimo.

Powers and Abilities: Superhuman Physical Characteristics, Flight, Can fire powerful sound blasts, Can temporarily stop time with the Satchmo Solo, Can transform parts of his body or the entirety of his body into different instruments for different attacks, Can summon sound cannons from the ground

Attack Potency: At least Multi-City Block level (Defeated Cerebella, Peacock, Ms. Fortune, Painwheel, Valentine, and the Skullgirl, as well as Double twice and implied to have beaten her in the past, Fought against the two previous Skullgirls, Selene Contiello and Queen Nancy Renoir, Was able to beat both Tommy Ten Tons and Andy Anvil in a fight)

Speed: At least Hypersonic (Can keep up with Peacock and Valentine)

Intelligence: High (Skilled in combat and a highly skilled detective, determined that Valentine was behind the attack on Lab 8 by identifying the minor difference between the scalpels used in Lab 8 and the ones used in Lab Zero)