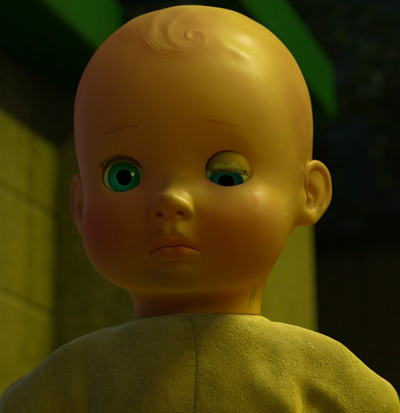 Big Baby is one of Toy Story 3's secondary antagonists. As his name implies, he is a very big toy in comparison to others, about the size of a real baby. After he and Lotso were lost by their owner, Daisy, the latter convinced him into thinking she didn't love him. After Lotso took control of Sunnyside Daycare, he became one of his greatest allies due to being physically superior to most toys and being able to easily overpower them. He betrays Lotso after noticing his violent tendencies, throwing him in a trash can.

Age: Unknown (Despite being a baby physically and mentally, he has been in Sunnyside for several years)

Attack Potency: Below Average level (Physically superior than most toys due to his size. Easily overpowered Lotso, Buzz and Mr. Potato Head)

Speed: At least Below Average Human (Usually seen as slower than humans), possibly Superhuman (Can keep up with Woody)

Lifting Strength: Below Average Human (Superior to Buzz Lightyear, who can lift Slinky Dog, Mr. Potato Head, Ham and Rex all at once with high difficulty. Superior to Woody, who did this. Had no problem lifting Lotso. Regularly closes human-sized doors)

Striking Strength: Below Average Class (One of the strongest toys)

Intelligence: Below average (Incapable of speech. When one of the Green Aliens accidentally squeaked, he walked to the origin of the noise to investigate. Still has the mindset of a young baby)

Weaknesses: Likely shares weaknesses with real babies, such as a lack of patience, manners etc.

Retrieved from "https://vsbattles.fandom.com/wiki/Big_Baby?oldid=6049291"
Community content is available under CC-BY-SA unless otherwise noted.