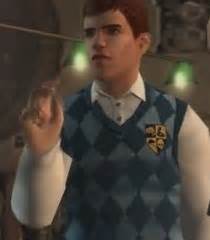 Bif Taylor is a main character in Bully, and a member of the Preppies Clique, He serves as a major antagonist in Chapter 2 and one of the few people who turned against Jimmy Hopkins in Chapter 5.

Attack Potency: Wall level (Traded blows with Jimmy in a boxing match, though he lost. He was also the boxing champion of Old Bullworth Vale)

Speed: Peak Human with Superhuman combat and reaction speed (Can keep up with Jimmy; can dodge his punches)

Lifting Strength: Peak Human (Should be comparable to Norton, who could effortlessly swing a massive sledgehammer)

Intelligence: Average (He is a skilled fighter, although he was one of the many people who got tricked by Gary)

Weaknesses: Is overconfident and self-assured.

Retrieved from "https://vsbattles.fandom.com/wiki/Bif_Taylor?oldid=4579877"
Community content is available under CC-BY-SA unless otherwise noted.