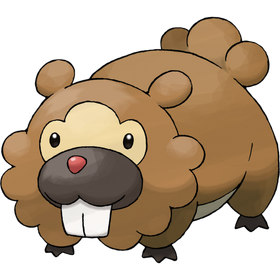 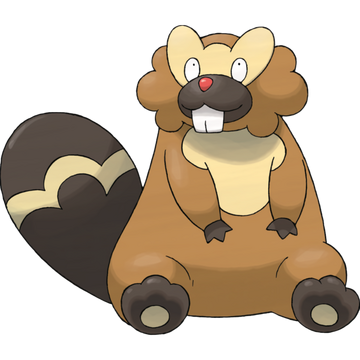 Bidoof (Japanese: ビッパ, Bippa), the Plump Mouse Pokémon is an early game, pure Normal- type rodent Pokémon introduced in Gen IV. It is known to have sharp teeth that grow indefinitely, so it needs to gnaw on things like rocks and trees to keep them down. Its teeth grow at the same rate as Rattata's. It is also said to have nerves of steel, and that it's more agile and active than it appears. It evolves at level 15 into the Normal-/Water- type Bibarel (Japanese: ビーダル Beadaru), the Beaver Pokémon. The Pokédex knows it as a Pokémon that is really good at building dams and is a swimmer as fast as a Feebas, though slow on land. Trainers know it as the Pokémon that can learn the most HMs. Back in Gen IV, it used to have a signature ability in Unaware.

Gender: Varies. Male or female. Species has an equal gender ratio of 1:1

Powers and Abilities: Superhuman Physical Characteristics, Darkness Manipulation (Via Crunch), Statistics Amplification, Can cause potential flinching with Headbutt and Hyper Fang or confusion with Rock Climb, Sleep Manipulation, Water Manipulation, Can prevent a finishing blow via Endure, Can ignore any stat change in the opponent, Stat changes on it will double in effectiveness, Self-Mind Manipulation, Debuffing of opponent's Attack and potential debuffing in Defense, Can render intangibility from Ghost- types inert and bypass evasion boosts with Odor Sleuth, Can use a random move in its sleep, Super Fang halves health with each hit regardless of stats, Nigh-Immunity to soul and shadow based attacks (Aka, Ghost- type moves) | Same to a greater extent, plus low level Earth Manipulation, more versatile water manipulation, Resistance to Steel, Fire, Water, and Ice attacks, and Healing via berries

Intelligence: Instinctual normally. High when it comes to battling, as Pokémon are naturally hardwired for battling

Weaknesses: Fighting-type moves. Simple doubles negative boosts alongside positive boosts. Moody raises one stat sharply at the cost of lowering another stat to a lesser amount. Unaware ignores the negative changes in the opponent's defense just as much as it ignores the positive changes in their attack | Also gains a weakness to Grass- and Electric-type moves, along with stuff mentioned before

Notable Attacks/Techniques: (Note: Every time "Bidoof" is said, it is referring to both, Bidoof and Bibarel)

Moves via Level Up