VS Battles Wiki
Register
Don't have an account?
Sign In
Advertisement
in: Tier 2, Tier Low 2-C, Characters,
and 60 more 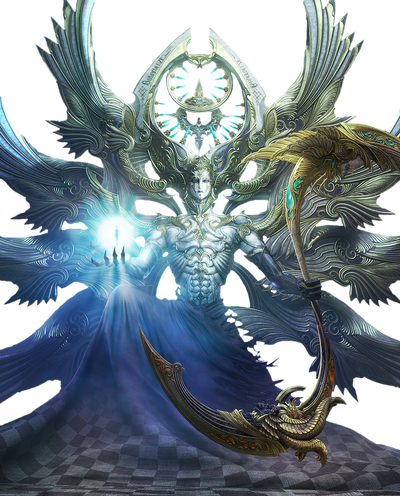 Powers and Abilities: Superhuman Physical Characteristics, Immortality (Type 1 and 2), Telekinesis, Light Manipulation and Holy Manipulation (Has supreme power over divine light), Energy Manipulation and Projection, Elemental Powers (Of the Fire, Ice, Electricity and Air variety, can also change his elemental affinities and cast all elements at once via Elementaga. Can also use Earth via Cataclysm, which can generate massive earthquakes), Explosion Manipulation (Via Wings of Destruction, which will cause the Monads he created before that to explode), Minor Darkness Manipulation (Can cast dark energy via attacks like Almagest), Gravity Manipulation (Via Graviton and Giga-Graviton), Reality Warping, Creation (Can create worlds, universes and lesser gods and beings), Life Manipulation (Can make life appear in a world or a universe and create new beings like Ereshkighal as well as beings close to their original. Can drain the life-force of other beings via Heartless Angel), Time Manipulation (Can use Haste and granted this power to Lightning), Empathic Manipulation (Stripped Lightning from her emotions), Illusion Creation (Created an illusion of Lightning to taunt Hope), Soul Manipulation (Can trap souls and strip other beings from theirs. Took the souls of Lightning's friends on the Final Day. Can cast souls aside), Absorption (Can absorb souls), Portal Creation (Created a portal leading to Cosmogenesis from Luxerion's cathedrale), Possession (Took over Hope's body), Age Manipulation (Regressed Hope's body to a younger age), Biological Manipulation (Tortured and molded Hope's body for 169 years), Fusionism & Transmutation (Merged Pulse and Lindzei into the Double Deity to fight Lightning), Spatial Manipulation (Can warp Cosmogenesis, which is merged with his the lower half of his body, to his liking), BFR (Can banish other beings into the Chaos and do the same with their counsciousness), Sleep Manipulation (Awakened Lightning from her self-imposed crystal sleep. Put himself into crystal stasis until the Door of Souls was found), Death Manipulation (Via Doom), Homing Attack (Via Divine Efflux and Damnatio Memoriae), Statistics Amplification (Via Holy Blade, which bestows various buffs on him, increasing his attacking power and defense), Status Effect Inducement (Via various attacks), Summoning (Can summon creatures like Eden minons and gods like Pulse and Lindzei), Power Bestowal (Granted divine powers to Lightning when he chose her to become her Savior and ultimately turned her into the new Goddess of Death), Non-Physical Interaction (Can interact with souls), Shapeshifting (Can alter his physical form in various ways, such as sprouting new wings), Size Manipulation, Large Size (Type 1, up to Type 6), Self-Sustenance (Type 1, 2 and 3), True Flight, Teleportation, Dimensional Travel, Expert Combattant, Weapon Mastery (Is a very skilled scythe wielder)

Attack Potency: Universe level+ (Created a new universe while the original was being consumed by the Unseen Chaos, which both he and Lightning said would be easy for him to destroy; struck down Mwynn, the original creator of the universe)

Speed: At least FTL+ with Massively FTL reactions and combat speed (Able to keep pace with Lightning, his attacks reach this speed)

Lifting Strength: Unknown, at least Class Y (Can reach this strength through an increase in size alone)

Durability: Universe level+ (Endured a beating from Lightning, tanked the backlash of his Hypernova, possibly survived the destruction of the old universe)

Stamina: Nigh-infinite, continually casts exceedingly powerful spells during his fight with Lightning and continued to resist even after being torn to pieces by Lightning's attacks, and is only put down for good thanks to the combined efforts of Lightning and her friends, but even then it is possible that he survived the attack and the end of the universe.

Range: Low Multiversal (Freed Lightning from her Crystal Stasis and abducted Hope from Nova Chrysalia, even though he was in Cosmogenesis both times)

Intelligence: Created the Fal'Cie gods, Hallowed Pulse, Etro, and Lindzei with his will. Bhunivelze also orchestrated the events of Lightning Returns from the beginning, creating the Order of Salvation and playing with the emotions of several members of the cast through the use of promises and illusions, including Lightning and Hope, for much of the game. He also used Hope Estheim, who by that point in the series had become a widely respected and a capable leader as well as an expert on the time paradoxes, as his vessel, acquiring Hope's knowledge on manipulating time and space as well as the ability to experience emotions to better understand and use them to further manipulate his foes to his ends. As the God of Light, he also wields the mightiest magics in the universe, including the ultimate elemental spells and the mighty Ultima and Heartless Angel in addition to nearly-exclusive abilities like the devastating Hypernova and Almagest. He is also aware of all the planes in the universe, easily retrieving Lightning from Etro's throne and taking the two into Cosmogenesis for the final battle.

Weaknesses: He is exceedingly arrogant and power-hungry, acquiring emotions has left him feeling terrified of his potential mortality and has left him impatient towards achieving his goal