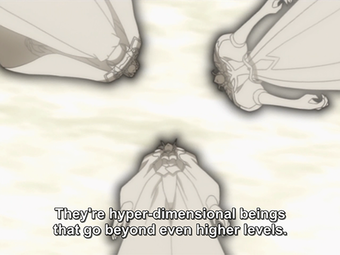 Dimensionless existence on this wiki refers to the state of being of characters who are superior in one way or another to the concept of dimensions. They are much different than merely zero-dimensional creatures, as rather than simply lacking dimensions at all (and thus are geometrically infinitesimal in every possible direction), they are conceptually superior to the concepts of dimensional physics. In fiction, these tend to be portrayed as super cosmic beings of a higher order than any-dimensional creatures. Specifically, they are also referred to as outerversal beings here.

Type 1: Non-dimensional: those whose nature is very different from the concepts of space and time (and everything that is in it), such as aspatial and atemporal objects, meaning the concept of physics has little to no influence on them. They usually possess an abstract, cosmic, or transdual nature, which makes them physically invulnerable. Specifically, these are adimensional objects that can be found in universes with an emphasis on very advanced mathematics and geometry, such as ultimate ensembles, or in universes where there are characters with various dimensionless characteristics.

Type 3: Boundlessness: Boundless creatures are those whose existence is not only conceptually superior to the concept of dimensions but all hierarchies of size. They are usually all-encompassing beings that encompass even beyond-dimensional creatures, to where they are only infinitesimal in comparison. The most common comparison is a droplet of water in an endless sea. Likewise, they can also simply be those that dwarf beyond-dimensional entities in a similar manner without necessarily being all-encompassing.

Irrelevant Strength: Due to the concepts of space and volume not applying to these beings whatsoever, their strength is irrelevant. Even an infinite-dimensional hyperverse has extremely little influence on a non-dimensional being and is practically nonexistent to a meta-abstract.

Irrelevant Speed: The concept of distance (at least in a spatial-dimension sense) does not apply to them. The concept of speed is irrelevant. Most beings of the boundless type are omnipresent.

Higher-Dimensional Manipulation: In many cases, these beings possess the same capabilities as higher-dimensional ones, but on a level where any dimensional size does not matter.

Transduality: Many characters of this kind are transcendent in relation to duality in addition to the concepts of space and time.