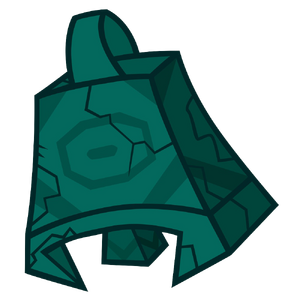 The Bewitching Bell was a magical item owned by the villain Grogar long ago, who used it to steal magic and stored much of his own magic inside it. However, it was stolen by Gusty the Great, who then banished him and hid the Bell away atop Mount Everhoof.

Presently in the show, Grogar reappeared and sent Tirek, Chrysalis, and Cozy Glow to retrieve the Bell. They succeeded, but chose to hide the Bell from Grogar to use it against him later. They eventually learned how to control it and betrayed Grogar, and set about their own plan for conquering Equestria, using the Bell to steal magic from Equestria's most powerful ponies.

Eventually, they were defeated by Twilight Sparkle and her friends, and Discord used the Bell to restore his, Celestia, and Luna's magic. It is unknown where the Bell currently is.

Age: Over 1,111 years old (Was owned by Grogar, who was a legend by the time Celestia started raising the sun)

Attack Potency: Unknown (Its powers do not focus on destruction), at least Solar System level, possibly Universe level+ with the magic it initially held (Had enough magic inside it initially to turn Cozy Glow into an alicorn, give Chrysalis a new form, and transform Tirek from his second form to his third)

Speed: Immobile (Cannot move on its own), Massively FTL+ attack speed (Its beam hit Discord, Celestia, and Luna before they could react)

Durability: Unknown, likely Solar System level, possibly Universe level+ (Grogar stated that it could not be destroyed, and it was completely undamaged from the giant rainbow blast that defeated Tirek, Cozy Glow, and Chrysalis)

Weaknesses: Requires a specific magic spell to work properly. A user cannot chose which magic they want to take from the bell after it has already absorbed it (Chrysalis, Cozy Glow, and Tirek couldn't take the Princesses magic without taking Discord's as well). It does not drain a magical being of their natural strength or disable Pegasus flight like Tirek's magic draining does, as the royal sisters were still able to fly and somewhat fight after the bell was used on them. A user has to first store the magic from an opponent inside the bell and then cast another spell to have the bell give them the power it absorbed (meaning the foe still has a chance to prevent the user from gaining their stolen magic if they can get the bell away from them before they can cast the spell again).

Retrieved from "https://vsbattles.fandom.com/wiki/Bewitching_Bell?oldid=6136891"
Community content is available under CC-BY-SA unless otherwise noted.