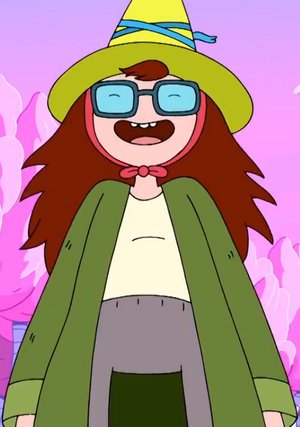 Betty Grof was once a kind and collected young woman who was a budding Antiquarian, as well as the fiance to Simon Petrikov. Though little of her personality has been shown, she has been depicted as being very strong willed and tough, as well as determined and dedicated to protecting her boyfriend. After Simon first went mad with the crown, she ran to find safety, only to force herself through a portal to the future to be with Simon once again.

Tier: At least High 6-A | At least 5-C, likely 5-A. Possibly up to 2-C or far higher with her strongest magic. Unknown with The Enchiridion

Age: Mid to Late 30s (Simon was in his early 40s during the Mushroom War, which was a few years after their break up)

Powers and Abilities: Superhuman Physical Characteristics, Basic Hand-to-Hand combat training | Magic, Reality Warping (All Magic works by tapping into the Multiverse itself and even non-wizards are capable of warping reality as they see fit, Time Manipulation, Life Manipulation, Anatomical Manipulation, Darkness Manipulation, Shadow Manipulation, Sub-Atomic Matter Manipulation, Biological Manipulation, Transmutation Teleportation, True Flight, Portal Creation, Pocket Reality Manipulation and Illusion Creation (Created a small pocket reality and filled it with illusions of her and Simon's memories. Has the same powers as Magic Man), Time Travel (With The Enchiridion; She planned to use the book's power to create a time portal and make it so the Mushroom War never happened)

Attack Potency: At least Multi-Continent level (Defeated Bella Noche in a single punch. Bella Noche was revered as an immensely powerful being by a council of wizards, one such wizard was Bufo, who should be well above average wizards such as the Ice King, who could created a massive storm that stretched across multiple kingdoms) | At least Moon level (At least comparable to the Nameless Alien and Citadel Guardians), likely Large Planet level (Absorbed the magical power of Magic Man, whose power was strongly implied to have overpowered his brother, Grob Gob Glob Grod, who struck down Orgalorg). Possibly up to Low Multiverse level (It was said that Magic Man's magic is what powered M.A.R.G.L.E.S., which fended off GOLB) or far higher (All Wizards draw their power from The Cosmic Imagination and can theoretically create and destroy whatever they wish by tapping into it's powers. Various unnamed Wizards were said to have created universes) with her strongest magic. Unknown with The Enchiridion (She managed to decipher the book to some extent and was planning to use it's power, and by doing so, she scared Prismo and the Cosmic Owl)

Lifting Strength: Unknown | Unknown. Possibly up to Class E via Magic (Her magical power boosted Patience to her Elemental Form)

Durability: At least Multi-Continent level (Tanked the destruction of Bella Noche's tower without any injury and should be comparable to Finn) | At least Moon level, likely Large Planet level

Stamina: Superhuman (Shown no signs of fatigue after leading the charge against Bella Noche and tanking a massive explosion and rock expulsion at the epicenter) | Superhuman

Range: Standard Melee Range (No magic or equipment, just her own fist) | At least several kilometers (Fairly weak Wizards like the Ice King were capable of creating cross-kingdom storms and Betty should be far above him). Possibly higher (Magic Man was said to have traveled to have traveled to "every dimension, every dead world" in the past). Multiversal+ with The Enchiridion (The Enchiridion can open portals to "all" dimensions of the multiverse, but it requires preparation and is not applicable to combat purposes)

Standard Equipment: None | The Enchiridion

Intelligence: Betty and Simon were budding Antiquarian's and were both very smart and well educated. Despite her academic knowledge, it's unknown her smart Betty is in the likes of combat and martial arts, but she seemed to have at least a basic knowledge of hand-to-hand combat. As "Magic Woman", Betty was shown to have a mastery over magic spells and presumably knows all the spells used by Magic Man.

Weaknesses: Doesn't seem to know much in the regard of martial arts and is overall very inexperienced within the world of Ooo | Seems to be completely insane