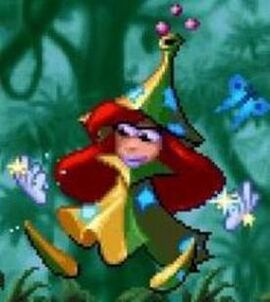 Betilla the Fairy is a fairy that has often helped Rayman in his adventures. She is considered the eldest of an elite group of fairies known as the Nymphs. These fairies are responsible for the creation of Rayman in response to Polokus's First Bad Dream. Since then she has helped grant Rayman and his friends powers to help stop Nightmares. She was particularly helpful in countering the threat of Mr. Dark.

Powers and Abilities: Superhuman Physical Characteristics, Flight, Magic, Longevity, Energy Manipulation and Power Bestowal (As a fairy, she is able to create silver lums to grant people powers), Teleportation, Portal Creation (Does it with help in Rayman Origins), Life Manipulation (Created Rayman with the other Nymphs), Summoning (Summons several objects and living beings; summons magic of ancestors with help), Telekinesis (her and other Nymphs do this in Rayman Origins ), Transmutation (Able to magically change things into other objects and animals), Electricity Manipulation (In Rayman 1), Breaking the Fourth Wall (Interacts with the player in Rayman Activity Centre)

Speed: Varies from Massively Hypersonic to Sub-Relativistic with Massively FTL+ attack speed (Comparable to Mr. Dark and other Rayman characters)

Lifting Strength: At least Class K, possibly higher (Comparable to other fairies such as Ly)

Durability: Varies from Small Country level to Solar System level (Should be comparable to Mr. Dark)

Intelligence: Above average (As a fairy, she is considered an emissary of Polokus; helps Rayman in multiple games; one of oldest and most experienced beings in the glade )

Weaknesses: Would lose most of her magical power if the Heart of the World was destroyed, like other residents of the Glade of Dreams.

Retrieved from "https://vsbattles.fandom.com/wiki/Betilla_the_Fairy?oldid=6241867"
Community content is available under CC-BY-SA unless otherwise noted.