VS Battles Wiki
Register
Don't have an account?
Sign In
in: Characters, Teen Titans, Beetlejuice,
and 45 more 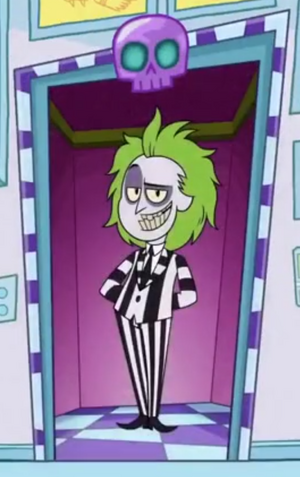 Betelgeuse is a mostly untrustworthy ghoul who's contacted by the Titans to help find the Halloween Spirit. While taking the appearance mostly from his film incarnation, his voice and personality is more reminiscent of his musical counterpart.

Tier: 8-C, at least 8-B with Reality Warping

Powers and Abilities: Superhuman Physical Characteristics, Reality Warping, Telekinesis, Possession/Body Puppetry (Possessed the Titans to have them perform the Banana Boat song. Made two giants hit themselves), Broadway Force, Fourth Wall Awareness, Toon Force, Self-Duplication, Immortality (Types 2 and 7), Body Control (Can contort his own face in nightmarish ways), Self-Sustenance (Types 1 and 2), Transformation, Levitation, Teleportation, Smoke Manipulation (Generated a puff of smoke upon his entrance), Regeneration (High-Low) (Able to regenerate his eyes after being ripped from their sockets), Dimensional Travel and Portal Creation (Drew a portal to the Netherworld), Voice Mimicry and Ventriloquism, Cloth Manipulation (Can generate clothes on a whim), Hammerspace (Pulled out an axe from nowhere), Creation (Created an outhouse), Shapeshifting (Can shapeshift into the form of a snake, a banana, a tarantula and more), Summoning (Summoned Winona Ryder in Lydia's wedding dress), Elasticity (Demonstrated here), Vehicular Mastery/Animal Manipulation (Can drive a train made of bugs), Energy Projection, Ectoplasm Manipulation, Biological Manipulation, Transmutation (Turned his own hand into a mallet, and Cyborg's head into a bird), Life Manipulation (Created a spider. Brought pumpkins and skeletal decorations, and an entire house to life), Fire Manipulation (Able to light a match with his power), Non-Physical Interaction (Able to interact with and seal abstract entities), Sealing (Sealed the Halloween Spirit in a bottle), Vibration Manipulation (Made the Titans Tower rumble), Air Manipulation (Vacuumed up the Halloween Spirit with a bottle)

Speed: Relativistic (Blitzed all the Titans at once and can move faster than they can keep up with him)

Striking Strength: Building Class+ (Was able to send Robin flying with a punch)

Durability: Building Level+ (Survived being smashed through the floor and eaten by a sandworm. Should scale to his own strength)

Weaknesses: If his name is spoken three times, he will be banished for good.