VS Battles Wiki
Register
Don't have an account?
Sign In
Advertisement
in: Characters, Beetlejuice, Tier 9,
and 26 more 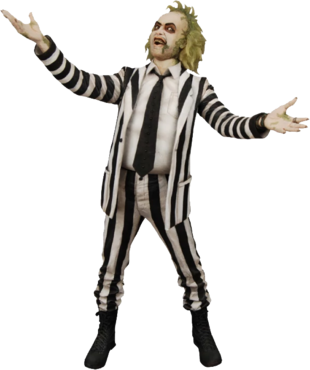 Betelgeuse, also called Beetlejuice is one of the main characters and later antagonist of the 1988 film, Beetlejuice.

Powers and Abilities: Superhuman Physical Characteristics, Size Manipulation (Can shrink others as he did with Adam), Shapeshifting (Can turn into a giant snake, turn his hands into mallets, and make spikes come out of his body), Levitation, Body Control, Technological Manipulation, Transformation, Reality Warping, Toon Force and Hammerspace, Immortality (Type 2 and 7), Self-Sustenance (Types 1 and 2), Possession, Teleportation, Body Puppetry (Even Adam and Barbra were able to do this), Vocal Mimicry and Ventriloquism, Telekinesis (Can move objects at will and make peoples body parts fall off), Can conjure and summon objects, Healing (Stopped the Maitlands from being exorcised and restored their health), Cloth Manipulation, Light Manipulation, Froze Adam in place, Pseudo-Invisibility (Likely comparable to Adam and Barbra), Life Manipulation (Brought inanimate objects to life), Limited BFR (Teleported Adam to the town model and teleported Barbara to Saturn [The afterlife desert], however, they both returned very quickly)

Attack Potency: Wall level (Smashed a couple clean through the ceiling,became a giant snake which would likely be in this tier), some of his abilities may bypass durability.

Durability: Wall level (Survived being smashed through a floor by a Sandworm), Should be comparable to other ghost who can survive being chopped in half, flattened, and decapitations.

Stamina: Unknown, likely quite high due to his toon force and the fact that he is a ghost

Intelligence: Above Average (Is a skilled manipulator, claimed to have graduated from Harvard Business School)

Weaknesses: Saying his name three times after he is summoned will cause his power to lessen or depower him entirely. He needs to marry someone in order to permanently be able to reside in the human world.