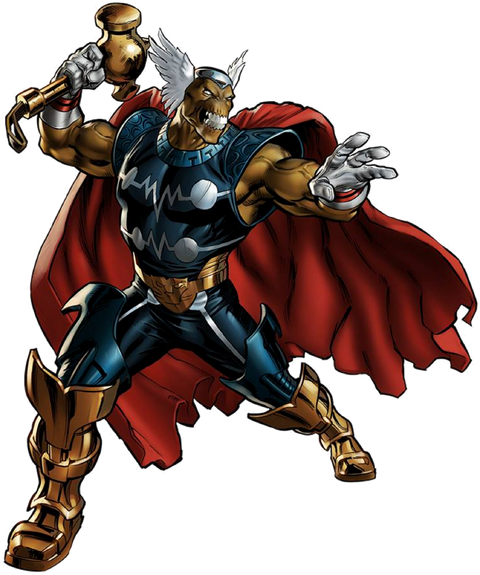 Beta Ray Bill is a fictional superhero that appears in comic books published by Marvel Comics. The character first appears in Thor #337 (November 1983) and was created by writer-artist Walt Simonson.

Debuting in the Bronze Age of Comic Books, the character was initially intended to be a surprise as an apparent monster who unexpectedly proves to be a great hero. As such, Bill becomes the first being outside of the Marvel Universe's Norse pantheon to be deemed worthy enough to wield Thor's hammer, Mjolnir. After an initial rivalry for possession of the weapon, the alien warrior was granted a war hammer of his own, called Stormbreaker, and the two reconciled as staunch allies.

Lifting Strength: Likely Class Y (Equal to Thor. Lifted the entirety of Asgard with him)

Stamina: Extremely High (Can fight for months on end without tiring.)

Intelligence: Knowledge of many alien races and cultures, knowledge of the Asgardian gods and their realm, very effective and experienced warrior, is capable of operating and creating machinery that can destroy planets.

Feats: Has ties and wins over Thor, Silver Surfer, and Stardust.