VS Battles Wiki
Register
Don't have an account?
Sign In
Advertisement
in: Tier 6, Tier High 6-C, Tier 6-B,
and 40 more 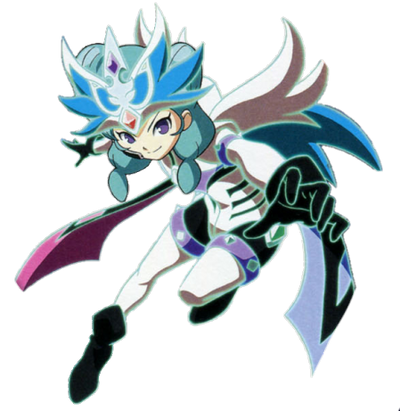 Beta is a character from Inazuma Eleven GO Chrono Stone who acts as the main antagonist in the Sengoku Arc. She is an A-Class Administrator, given the code ‘Beta’ in El Dorado, the organisation governing the world 200 years in the future and travels through time fixing errors and changing history in a way which does not bring severe consequences to the present. She comes off as innocent as sweet, in somewhat of a condescending manner, but when particularly annoyed she changes personality and becomes rather violent and overwhelming.

During Chrono Stone, she is tasked with erasing soccer through history and defeating Raimon as the last stand for the existence of soccer after Alpha’s firing. She firstly enforces the ban on soccer in Japan by masking her and her team Protocol Omega 2.0 to appear as the Japanese representatives, and violently beat the American team in a friendly match. After succeeding and defeating Raimon easily, she mind controlled the members into giving up on soccer, as well as seal and trap Endou Mamoru within her sphere device to complete her mission. However, after it is revealed the keshin users of Raimon resisted the sphere device’s mind control, she follows them into the Sengoku Era in order to once and for all break their spirits. After a final match however, Protocol Omega 2.0 is defeated through the use of Shindou’s Nobunaga Mixi Max, and Beta is sent to MUGEN Prison for her failures.

Beta returns during El Dorado’s proposal of an alliance with Raimon for the upcoming Ragnarok games, in order to protect the world from the Second Stage Children, and is placed on Team 02 with Shindou as their captain along with Alpha and Gamma against Feida’s team Giru. Despite their level ups after training in MUGEN, Alpha, Beta and Gamma could not see eye to eye and instead intended on doing their own thing in the match than working together. After seeing Shindou’s devised tactics Kami no Takuto Fire Illusion that matched her abilities perfectly, she began coordinating, and the team had eventually won with a score of 5-4. After the match, she allowed and supported Chrono Storm in their final fight against The Lagoon.

Age: Unknown, most likely in her teens

Attack Potency: At least Large Island level (Comparable, if not stronger, than Alpha, who could keep up with Resonanced Tenma using 18x parallel versions of himself to multiply his power, Able to break through Tenma’s Majin Pegasus Arc and Sangoku’s Burai Hand without hissatsu. A small distribution of her power over 11 people could allow untrained men to match Raimon for a little while, as well as summon a Keshin), higher with Kokuu no Megami Athena (Beta’s Keshin grants her stronger powers and abilities when released, Athena Assault was able to easily burst through Nishiki’s Keshin), higher with Keshin Armed (Much stronger than Base Keshin, her Double Shot with Keshin Armed equipped was able to easily get through Shindou, Tsurugi, Nishiki and Shinsuke with their Keshins summoned, easily beat Shinsuke with his Keshin Armed) | Country level (Much stronger than before, able to keep up with Second Stage Children and was confident that she could beat any team in Feida, contributed ⅓ of the power in Omega Attack), higher with Kokuu no Megami Athena (Athena Assault was able to bust through Bufuu’s Rejection), higher with Keshin Armed

Stamina: Extremely High (Was able to evenly ration out a fraction of her power to noticeably strengthen the rest of her 10 team members while still remaining the dominant force, Could still summon her Keshin Armed despite this)

Intelligence: Fairly High (Based on soccer knowledge and skill, can transfer and acquire data from and to other people, Is ranked as an A-Class El Dorado Administrator and should be knowledgeable specifically on time travelling)

Weaknesses: Somewhat Bipolar, which can either lead her to be overconfident, or excessively overdoing. Can only summon her keshin a limited number of times, and it will require time before a Keshin that has been defeated can recover. Keshin Armed drains her stamina longer than usual and has a time limit (Which is why it is used in shorter bursts).

Keshin: A Keshin, or Avatar, is the physical manifestation of one’s spiritual energy and heart, with its strength and abilities determined by the spirit of its user. These Keshins are brought out with intense training and feeling among individuals, making them only usable by the extremely skilled. These Keshins take the form of a large anthropomorphic creature that appears visibly behind their summoner and with this Keshin summoned, the user has the physical force and power of it on their side, increasing their strength and momentum as well as gaining new hissatsu or abilities. In some cases, however, Keshins can only be brought out a limited number of times and if destroyed, they will require time to restore for the user to summon them back (Though is usually only a few minutes or so within the matches). However, Keshin drawing is possible which allows teammates to give a portion of their spiritual energy to draw out and strengthen another person’s Keshin. Keshin fusion is also possible, in which users can fuse their souls to create a stronger keshin. Keshins also protects the user’s mind and spirit preventing them from being mentally deterred from their passions or mind-controlled (Note that it doesn’t protect from any other mental attacks). In the Danball Senki crossover, it is also stated that Keshins can prevent their users from being completely erased from space-time, though only if their spirits are strong and do not give in to despair. 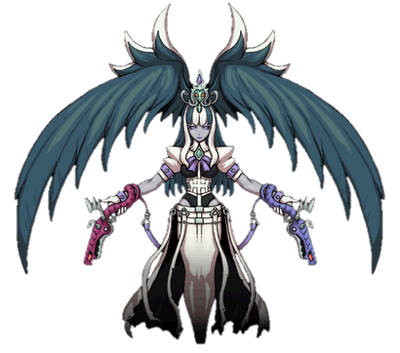 Kokuu no Megami Athena:, or Goddess of Just Warfare Athene, is Beta’s Keshin, resembling the goddess Athena in a more gothic style, with wings and two pink and blue guns with a serpent like resemblance. These guns also reference to Beta’s Double Shot technique. She is said to be the ‘Goddess of the Vacant Skies’ and a severe but fair warrior. Beta uses Athena frequently, mainly for Keshin Armed and when her personality starts shifting more aggressively. Beta when Armed had shown to be an extremely strong force, even more so than usual, with no one in the series having been able to stop her shots, and was able to easily beat through four of Raimon’s Keshins and Shinsuke with his own Keshin Armed form.

Ghost Mixi Max: Beta has shown the ability to be able to transfer her own power similar to others through the use of Ghost Mixi Max. With this, she emits a purple aura and expands out her energy, connecting it to her team as she powers them up. She has been shown to be able to give noticeable amounts of power to each of her other members, to the point a man with no prior training from the Sengoku Era unlocked his Keshin via sheer power, and was able to briefly contend with Raimon at the time, without her seemingly being phased. She was also able to summon her Keshin as well as activate her Keshin Armed when transferring a lot of power. 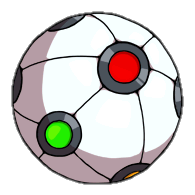 Sphere Device: The Sphere Device is a multi-utility device in the shape and size of a soccer ball which is used by El Dorado. This device can expand out to a ball from just a disc and can move at the user’s will, even without having to kick it. This allows it to freely levitate, come back to their user when far or seek out others on its own (even through separate timelines). It has multiple buttons around that each activate a different utility.