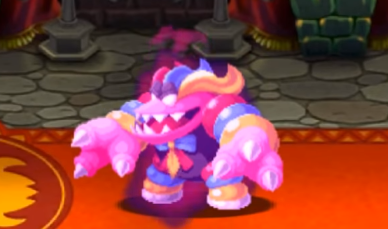 Best Fitness Friends is the final boss of Bowser Jr's story in Mario & Luigi: Bowser's Inside Story + Bowser Jr's Journey. It's a malatone-powered monstrosity created by the fusion of Dieter, Kaley, and Beef as a final resort in killing Bowser Jr. and his group. Their final confrontation was held in Bowser's castle, around the same time when Bowser, Mario, and Luigi were battling Dark Bowser, the Dark Star, and Dark Fawful at Princess Peach's castle.

Attack Potency: Large Star level (Fought Bowser Jr., Kamek, and all the Koopalings all at once)

Speed: Massively FTL+ (Was able to keep up and react to Bowser Jr. and Kamek)

Durability: Large Star level (Tanked several hits from Bowser Jr, Kamek, and the Koopalings all at once)

Malatone Charge: BBF will drastically boost all of its stats.

Summoning: BFF will create exact replicas of its foes and characters it met, sporting the exact same powers and abilities as the originals.

Piercing Projectile: Fires a massive pink laser from its mouth.

Fitness Vortex: BFF will suck the powers and abilities right out of the target, temporarily making them incapable in using it.

Cyclone Breath: BBF exhales a gust of wind at his foes.

Mystery Box: Summon a box that will either heal it and its allies, inflict damage on its opponents, or boost one of its stats.

Retrieved from "https://vsbattles.fandom.com/wiki/Best_Fitness_Friends_(Fusion)?oldid=5387605"
Community content is available under CC-BY-SA unless otherwise noted.