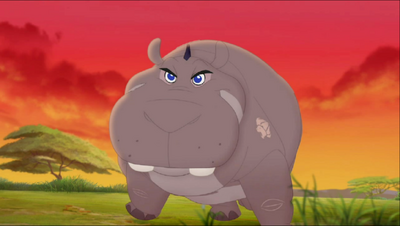 Beshte is the young hippo who is one of Kion's friends in the Disney Junior show The Lion Guard. His position on the team is the Strongest in terms of physical strength.

Age: Unknown (around the same age as Kion)

Powers and Abilities: Superhuman strength, speed and durability, can hold his breath for a long time

Attack Potency: At least Street level (The strongest member of the Lion Guard in terms of physical strength, and can move a large rock)

Speed: At least Peak Human (Hippos can actually run at speeds of 19 mph)

Striking Strength: Street Class (Can push up a large tree)

Weaknesses: As a hippo, he can't survive well in the hot sun without mud, water, or shade covering his skin.