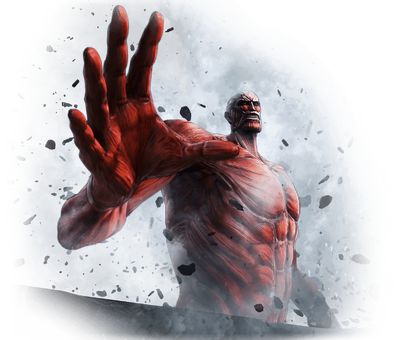 Bertolt Hoover was an Eldian and one of Marley's Warriors. He possessed the ability to transform into a Titan known as the Colossus Titan. In the year 845, he, Reiner Braun, and Annie Leonhart breached Wall Maria in an attempt to lure out and acquire the Founding Titan for Marley. After that, he joined the military and graduated the 104th Training Corps, ranked 3rd, and later joined the Survey Corps, until his identity as the Colossus Titan was revealed.

Classification: Human, Titan Shifter, Inheritor of the Colossus Titan | One of the Nine Titans

Attack Potency: Wall level (Able to harm other members of the Survey Corps who are as durable as himself, Temporarily overpowered Mikasa in single combat) | City Block level (His transformations alone yield this much, destroyed part of Wall Maria with a kick). At most Small Town level via Instant Form Dissipation (At full power it yields this much energy, and even a partially formed, nearly completely depleted body yielded this much energy)

Lifting Strength: Class 1 (Would need to be able to lift this much to be able to handle the force exerted on his body by the 3D gear) | At least Class M (Much stronger than the Attack Titan. Because of his size, he should weigh over two thousand tons)

Durability: Wall level (Can survive the energy exerted on his body by the impact of landing at high speeds on solid surfaces with the 3D Maneuver Gear) | City Block level

Intelligence: Above Average (Bertolt graduated in 3rd position among the trainees and was noted as the best user of the vertical maneuvering equipment among them. He also had outstanding marksmanship skills when he was a child training among the Warriors, as well as other military and combat skills)

Weaknesses: Has low self-esteem | Can be killed if the one meter long and 10 centimeters wide area of his nape where his body is is cut, and the transformation can only be maintained for so long