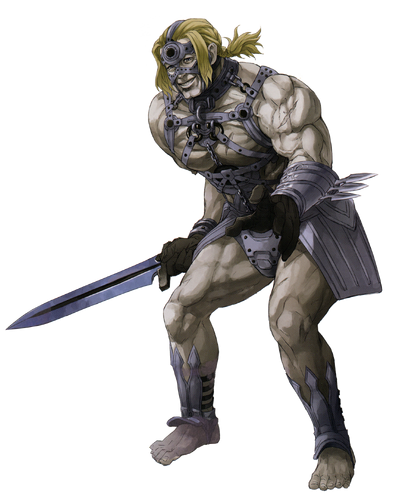 Berserker of "Red" is the Berserker-class Servant of the Red Faction in the Great Holy Grail War of Fate/Apocrypha. It is unknown which of the five puppet Masters of the Red Faction first summoned him, and unlike the rest who eventually become the Servants of Shirou Kotomine, he forms a contract with Caster of Black when captured by the Black Faction.

Berserker's True Name is Spartacus, the strongest Gladiator and the ringleader who raised a large-scale rebellion of slaves in Ancient Rome known as the War of Spartacus.

Age: 40 at the time of death of his real-life counterpart

Powers and Abilities: Superhuman Physical Characteristics, Expert Swordsman, Berserk Mode and Rage Power with Mad Enhancement, Regeneration (High-Mid; regenerated instantly after his body was torn apart by Atalanta's Phoebus Catastrophe), Healing, Absorption and Empowerment via Crying Warmonger (his power and size increase by converting the damage he's taken into magical energy), Aura via Crying Warmonger over enough time (Spartacus' mana will saturate the surrounding area, allowing him to damage even Servants with the debris thrown up by his attacks), Transformation and Large Size (Type 1) via Crying Warmonger over enough time, Self-Destruction (Absorbing too much energy from damage, or being damaged to the point of near death, grants him enough energy to destroy "everything before his eyes" via overloading) and Servant Physiology

Attack Potency: Island level (Has A-Rank Strength, making him comparable to the likes of Heracles and Artoria at her peak. Can easily kill servants that are physically weaker than him in one slash. Would have torn apart Atalanta's torso with a single kick had it fully connected). Higher with Crying Warmonger (Can boost his physical abilities depending on how much damage he receives. When pushed to his limits, he was able to destroy a meteor during the SIN Lostbelt but at the cost of damaging his Saint Graph). Large Island level with self-destruction (Annihilated half of the Fortress of Millennia and covered an entire battlefield making it somewhat comparable to Brahmastra Kundala. The attack was compared to a calamity like an earthquake and tsunami.).

Speed: Massively Hypersonic (Comparable to other Servants of this speed), likely higher with Crying Warmonger.

Lifting Strength: Class K, possibly higher (Has a A Strength Parameter, making him comparable to the likes of Saber and Heracles, and notably superior to Achilles. Grappled several bronze golems that weighed several tons and flipped them over.)

Durability: Unknown (His EX-rank endurance represents his ability to continue fighting after being wounded rather than his physical durability. While he can be wounded by ordinary combat homunculi, even powerful Anti-Army Noble Phantasms like Atalanta's Phoebus Catastrophe will fail to kill him even if his body is torn to pieces in the process).

Stamina: Tireless (Can convert part of the damage inflicted by opponents into Magical Energy and storing it within his body), the longer a battle is prolonged, the more advantageous it is for Spartacus.

Intelligence: Spartacus was the leader of the rebellion army, managed to repulse an assault force of nearly three thousand dispatched by the Romans and they kept defeating the Roman army without losing a single battle. However, due to EX-Rank Mad Enhancement, he is truly insane and can only focus on killing those that he considers "oppressors."

Weaknesses: His Noble Phantasm cannot be shut down and he will eventually become a grotesque monstrosity as he continues, eventually breaking apart and self-destructing in a massive explosion after receiving enough damage.

Start a Discussion Discussions about Berserker of Red (Spartacus)