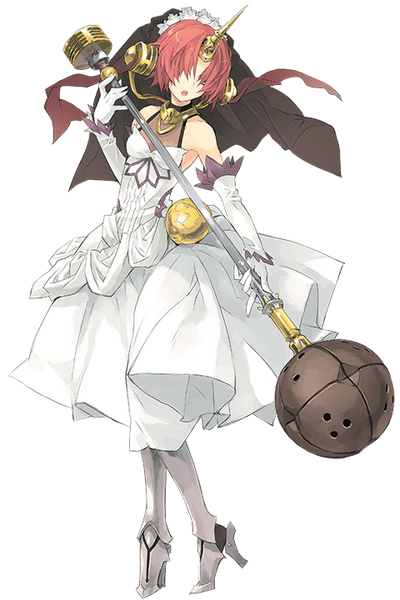 Berserker of Black is the Berserker-class Servant of the Black Faction during the Great Holy Grail War, summoned by Caules Forvedge Yggdmillennia.

Her True Name is Frankenstein; more specifically, the Frankenstein's Monster, created by the scientist Victor Frankenstein, who sought to recreate the birth of humanity with her creation. However, she was labeled a failure due to her lack of morality and undeveloped mind, and though she was disassembled and abandoned, she reconstructed herself and doggedly pursued her creator across the world.

She wished him to create a mate for her so that she would not be alone in the world, but he refused, and in retaliation, she killed acquaintances of his, even his fiancee, and ultimately chased him to his death. With nothing left for her in the world, she wandered into the north and burnt herself on a pyre.

Powers and Abilities: Superhuman Physical Characteristics, Rage Power and Berserk Mode, Electricity Manipulation (Can release bursts of electricity with Bridal Chest), Energy Absorption (Galvanism absorbs energy and other immaterial forms of attack, converting them into electricity), Statistics Amplification (Can use the energy she absorbs to increase her strength and speed), Can rob others of their ability to think and breathe for a period of time, Supernatural Luck, Minor Fate Manipulation (Servants with B-rank Luck or higher can change their own fates to evade inevitable outcomes such as having their hearts destroyed by Gáe Bolg) and Servant Physiology

Attack Potency: Island level (While she's fairly weak, she should still be comparable to other combat-ready Servants, such as Archer. However, she is still considered a second-rate Servant and is easily overpowered by Mordred but was able to restrain and strangle the latter long enough to utilize Blasted Tree while on the verge of death). Higher with Blasted Tree (When used effectively, it is capable of easily killing most Servants at close range and would've killed Mordred had she not been bailed out by a Command Spell).

Stamina: Effectively limitless. At full power, she can fight perpetually without any outside support and without the need for rest.

Intelligence: Due to the effects of Mad Enhancement, Frankenstein has lost most of her linguistic abilities and higher reasoning, simply charging straight into battle with reckless abandon when ordered to. However, though she is able to recognize and differentiate between her allies and opponents and is a competent combatant, albeit middling by Servant standards. In addition, she is conscious enough about energy to unplug appliances when they're not being used and turn off the lights. Frankenstein can also speak and produce complex thoughts if absolutely necessary, but the effort required taxes her, leading her to remain silent or use moans and body language to communicate her feelings.

Weaknesses: Frankenstein loses much of her reasoning and motor skills due to the effects of Mad Enhancement, and her most powerful attack is a suicide move. Her heart is within the core of the Bridal Chest, and she could run out of energy if separated from it and will be killed if it is destroyed.

Bridal Chest: A Maiden's Chastity: Frankenstein's large battle mace, which discharges electricity when used in combat. She keeps it with her at all times, as within the orb at the top is her reactor core, essentially acting as her heart. While it is a useful and powerful weapon, its main function is absorbing magical energy from Frankenstein's surroundings, converting it into electricity and channeling it into her body and through her Magic Circuits. Highly-efficient, it reabsorbs all the energy wasted by her, recycling it back into her system so she can use it again. It allows for Galvanism, the conversion of energy and thaumaturgical attacks such as energy beams or gusts of wind into electrical energy and rendered harmless.

In an environment with high amounts of magical energy, it'd essentially act as a perpetual motion machine, supplying Frankenstein with a virtually limitless source of energy. She can fight perpetually at full power, requiring no outside support or rest and not needing to breathe. However, as her reactor core is located within Bridal Chest, if it is lost, she loses access to its abilities, and if it is destroyed, she will die.

Blasted Tree: The Lightning Tree of Crucifixion: Frankenstein's ultimate technique, activated by planting the fin of Bridal Chest into the ground and releasing all of her energy. As all of her magical energy builds up inside of her, Bridal Chest ultimately causes an explosion of electricity that forms the shape of a tree and destroys everything within a hundred meters. She can use it on a single target instead if she lacks Bridal Chest, activating it from her body. It is normally a suicidal move, as it takes all of her magical energy to use, causing death as all her functions come to a halt. She can use it without releasing all her limiters and killing herself, but its power is greatly reduced if she does so.

However, Blasted Tree has another secret function; the electricity that comes out with its use is not just lightning, but Frankenstein's will, and as long as this will endures, Frankenstein will never truly perish. This allows for a very low chance that a second Frankenstein will be born with Blasted Tree's complete activation.

Start a Discussion Discussions about Berserker of Black (Frankenstein's Monster)