VS Battles Wiki
Register
Don't have an account?
Sign In
in: Characters, Female Characters, Nasuverse,
and 22 more 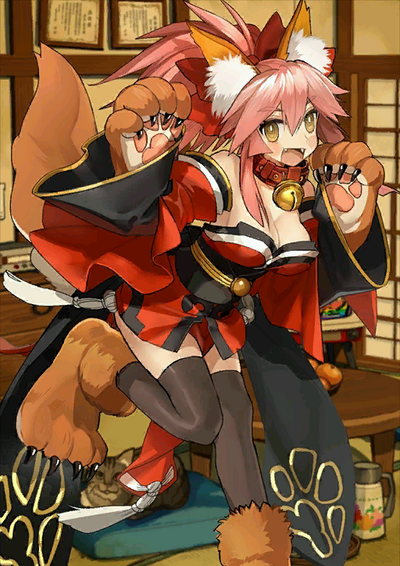 Her True Name is Tamamo Cat, one of the Tamamo Nine that makes up all of the original Tamamo and her eight Alter Ego’s. Formally one of all of Tamamo-no-Mae’s nine tails that were obtained during the latter's training in an attempt to save a “certain master”, the original Tamamo cut off eight of her tails to return herself back to her one-tailed form and sealing the cut off pieces in the Imaginary Space dimension. However, all eight, having retained a portion of Tamamo’s divinity in them and thus gaining the status of Heroic Spirits of their own, were able to escape and go on a rampage, especially against the original for abandoning them in the first place.

Tier: 6-C, higher with Opulence of Sun and Shine and Catnap

Classification: Berserker-class Servant, Heroic Spirit, One of the Tamamo Nine

Powers and Abilities: Superhuman Physical Characteristics, Magecraft, Shapeshifting, Hand-to-hand Combatant, Berserk Mode and Rage Power, Regeneration (Mid-Low; all Servants have low-level regenerative abilities that allow them to easily heal cuts and wounds. Low-Mid over time; Servants are able to continue fighting even with a hole through their gut, and can regenerate unless their head/heart are destroyed, or they run out of mana. High with sufficient enough hate; She managed to reform from black hole out of sheer hate but her regeneration will be nullified and die when she doesn't have hate anymore), Supernatural Luck, Minor Fate Manipulation (Servants with B-rank Luck or higher can change their own fates to evade inevitable outcomes such as having their hearts destroyed by Gáe Bolg), Curse Manipulation (Tamamo Cat cursed the crew to not ever leave the asteroid belt), Intangibility (Due to Tamamo Cat having her state being unstable on a quantum level, she is intangible to even Servants' attacks but this can be removed when she doesn't have enough hate anymore) and Servant Physiology

Attack Potency: Island level (Has B+ rank strength, thus is stronger than Saber under Shirou. Is a more physically capable fighter than her original self. Fought Mash and Kiyohime during the Halloween event), Island level+ with Opulence of Sun and Shine and Catnap (As her Noble Phantasm, it should be stronger than her normal attacks)

Speed: Massively Hypersonic (Boasts an A rank in speed, thus enabling to easily keep up with most Servants of Chaldea)

Intelligence: Having not much reason to begin with and as a summoned Berserker, Tamamo Cat does not possess much intellect other than the occasional muttering of words and simply doing her own activities. Acting like a wild beast where no mutual understanding can be made with her. However, Tamamo Cat seems to still possess some form of intellect if rather limited and in such a way that not everyone could truly understand her, as she was able to give Chaldea and the Servants summoned there clues during the Se.RA.PH sub-singularity event and is even able to tell when something is bad or awful such as Elizabeth’s singing giving pain to Ritsuka, Mash, and Kiyohime during the Halloween event.

Weaknesses: Cannot attack while in spirit form. Does not make use of her magecraft due to having forgotten most of it while summoned as a Berserker. Using her Noble Phantasm makes her tired and causes her to sleep for a time, making her enemy take the chance to attack her should they avoid or survive her attack